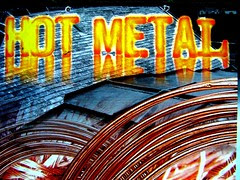 Hot metal
Looking at the Byron review, one of the key questions is “What are the benefits and opportunities that new technologies offer for children, young people, their families, society and the economy?” well that’s OK for starters and there’s plenty to say on that topic. But really it’s all about risk, and that’s tricky…. You can’t argue that there’s no risk involved for children and young people surfing the net any more than you can argue that there’s no risk in going to the local park. More important though is gauging the scale of the risk, and educating children and parents to be aware of risks. One of the problems that a number of us have reported on is the way in which schools (and school authorities) become so pre-occupied with internet safety that their students rarely get beyond the walled gardens that are so heavily protected by filters and firewalls. Well the worry is understandable, but if school environments are so heavily policed don’t we end up severely limiting children’s explorations of the internet? Then we filter out most of the best stuff along with the worst stuff and deprive them of the opportunity to choose sensibly. I also think we need to think more clearly about what we mean by risk – exposure to violence is one so-called risk factor which always gets cited. But don’t we all really know that the history of narrative shows our on-going fascination for fictionalized violence? On that note, here’s Henry Jenkins getting to grips with the concept of ‘media violence’ - pretty convincing.
Posted by Guy Merchant at 12:20 PM