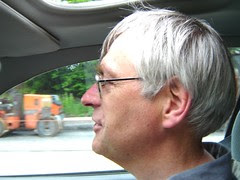 Mogie
I'm back online! It was so strange to have no connection at home - I literally felt cut off (does that suggest some sort of dependency?). I called in the computer shop this morning and the guy said "Do you want the good news or the bad news?". "Well I'd like the bad news first." I replied. "There's nothing wrong with it." he said. "The good news is that we charge you £15 for checking it over." I was OK about that. He suggests my blue screen may have been caused by a device conflict. Anyway, it seemed at that point that there was no alternative but to buy a new monitor - illogical, I know, but there you go. Anyway, everything's fine and dandy now.

So my good friend, my chauffeur took me to Mr Straw’s house this afternoon. In an unlikely location on a back street in Worksop, middle class Edwardian life is perfectly preserved. The house is like a time capsule, full of the everyday life of the era from its furniture and fireplaces to its newspapers and novels. The cupboards are stuffed full of abandoned products: Cerebos Salt, Bovril in jars, tincture of iodine, Oxo tins, Lux powder and jars of preserves, goose grease and so on. Visiting the house is to fall into a vortex of abandoned ephemera through a portal of cultural archaeology headlong into starched middle class morality and petit-bourgeois aspiration. That’s before you stumble unexpectedly in the back-story that seems to hang like fog in the atmosphere of the place. William Shaw who abandoned a teaching career in London to return to that small town of his birth to keep house, to become a substitute mother, whilst his elder brother grimly maintained the family business - his brother Walter, grocer, seed merchant, blender of high quality tea. The National Trust has preserved the Straw’s house as it was found – or to be strictly accurate not quite as it was found – offering up as a result a manicured social history. An archive haunted by an uncomfortable, restless presence. To me it felt like an empty context, as if the subjects of this life drama, the Shaws had been torn away from it. Like a photographic negative of these digital spaces which are so powerfully alive and populated by the ghost-like force of their dispersed subjects.

penny said...
This comment has been removed by a blog administrator.
4:25 PM

Congratulation! It's great to see you online. Although some words are difficult to understand for me, I still like your blog which shares interesting information to everyone.

Thank you, Penny, it's great to get your comments!