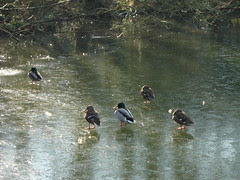 Ducks on ice
I like the idea that networking sites cluster around nodes or social objects - MySpace around music, Flickr round pictures and YouTube round video. Of course they also seem to add another dimension to pre-existing networks. Facebook, by contrast, is a bit different because the network itself seems to be the social object. Is that why I’m suspicious of Facebook? There’s a whole host of reasons for non-participation here; other bloggers just don’t get it; and then, of course, there’s the questionable data protection issues. But maybe there’s also got to be a limit. Blogging, Allconsuming and Flickr take some time –and then of course there’s the teaching blogs, the wikis…not to mention music sites like Clare Large’s intelligent audio.
Posted by Guy Merchant at 12:22 PM