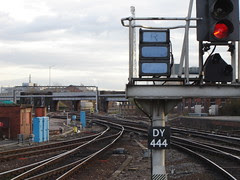 Tracks
I was here today – I know it doesn’t look great, but the staff are fabulous and the students really interesting. The place has recently re-branded itself, which I think is a good move - after all central could be anywhere, whereas , well that’s an entirely different matter. The university’s front page explains that: the move follows extensive consultation with students, staff and key university stakeholders, who were asked to vote on three alternative names for the university. Of the 4,700 people who responded to a survey earlier this year, the greatest number (42.8%) voted in favour of . That's the power of democracy!