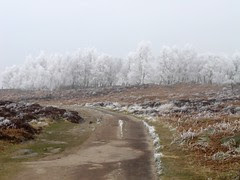 frost trees
New literacies aren’t a particularly hot topic according to surveys in the UK and USA. Both the IRA survey and the National Literacy Trust's survey depend on asking experts to read the runes. So experts in both countries think that new literacies and new media should be hot topics but aren’t. Of course both surveys are rather dependent on who’s asked (and, I suppose, who does the asking). Here in the UK we’re still obsessed with phonics….and assessment - no surprises there. Comparing the lists you can’t help but be struck by how they mirror the political agendas in both countries.
Posted by Guy Merchant at 1:50 PM