As Twitter makes more inroads into my professional and social networks I've become interested in two different phenomena. The first is about the silences, particularly those periods in the day when those I'm following go quiet. What has distracted them? What is it that they are not tweeting? The second is in part provoked by Rebekkah's idea of the "refuseniks". Those who don't want to. A colleague spoke about this today, referring to it as the invasion of trivia. I don't want to know. What's interesting is that I do! And what informs those choices. Whether you Twitter or not, my own Twitter Fountain should display above (I hope!).
Posted by Guy Merchant at 9:56 AM No comments: 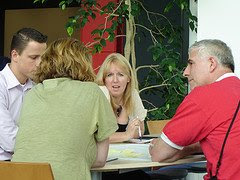 Just before checking out of the hotel in Nijmegen I wanted to archive two of the interesting things I've discovered. One is a mash-up which displays a scrolling Twitter-feed over the top of tagged images in Flickr, and it's called Twitter Fountain (see above). A great way of capturing and making public conference back channeling. The other is a Twitter app which allows you to create a closed community in a business or educational setting. That's called Yammer. Although I'm never to sure about closed systems I'm sure they can be very useful, and important in some contexts.
Posted by Guy Merchant at 11:57 PM No comments: 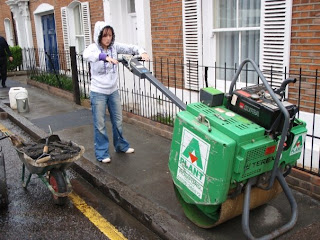 I’m starting to write a bit about young people’s use of social networking sites, and working on the idea that there are three kinds of activity that are relevant to educators and educational settings. The first of these is to learn about them and their role in learners’ lives; doing this is an essential part of that crucial work of understanding the worlds that our students inhabit and recognising the knowledge, skills and dispositions that are involved as social and cultural capital. The second is to learn from them, in order to appreciate the kinds of social interaction and informal learning SNSs can support, and as a result to reflect upon and refresh our own pedagogies and designs for learning, whether or not these involve new technologies. The third and final area of activity is to learn with them, and by this I mean to focus in a critical way on the literacy practices that are developing in and around social networking, as well as the identities that are produced and performed through the various acts of multimodal and collaborative textual composition.
Posted by Guy Merchant at 12:04 PM No comments: 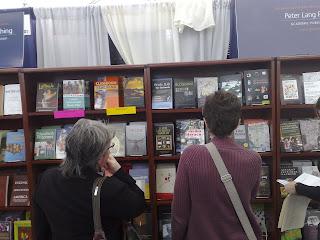 Here a shopper browses for a good read at the bookshop in San Diego. Mmm what about the Web 2.0 book? The music-sharing chapter is interesting. We enjoyed writing that partly, I suspect, because it was an area we hadn’t given much thought to before. All those issues about ownership copyright, and distribution are fascinating. I don’t think we use the word piracy and that’s good because, as this article rightly points out, RL pirates steal by force and acts of violence not just by sneaking a copy. As I’ve observed before, the whole area of copying is interesting in its own right. The social order depends on when, what and how much is appropriate to copy. This is true of fashion, essay-writing, music and speech to name but a few instances. To get by you need to copy in socially approved and regulated ways. Selling fake designer goods, plagiarism and illegal copying can get us into trouble. Style, quotation and cover versions can earn us plenty of approval. And then of course we freely redistribute stuff as part of the circulation of cultural goods. So Emma recommended Jazztronik via this YouTube video. I’ll raise that with Far Too Loud (not so commercial, but also on YouTube!).
Posted by Guy Merchant at 10:22 AM No comments:

It all started with the biro... 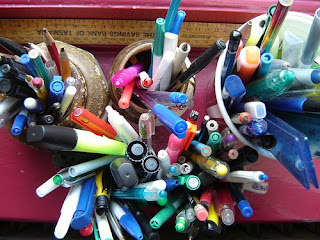 At first glance the Steer Report on learning behaviour (and there’s an interesting phrase) seems very worthy. New technology gets a look in: whiteboards are good, mobile phones useful for surveillance, cyberbullying an ongoing concern etc etc. There are also recommendations for more training for teachers. So let’s hope this doesn’t get oversimplified as ways to pacify unruly kids. But all in all it’s not as bad as the media headlines which started off by drawing our attention to ‘disciplinary measures such as forbidding pupils to doodle on books and folders and refusing to mark their work unless it has been written with a fountain pen’. If that’s how to promote learning behaviour then higher education is doomed.
Posted by Guy Merchant at 12:10 PM No comments: 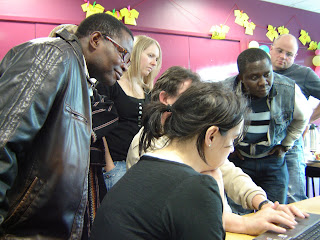 The new Curriculum and Teaching Innovation handbook (pdf) from Futurelab provides a useful overview of some of the changes and debates that are currently circulating. Following on the Department of Innovation Universities and Skills publication Innovation Nation, it seems that there’s now some scope to rethink things, albeit along certain lines. I still have my Harris, Lawn and Prescott (1975) and wonder how the debate has changed in 34 years. The contextual details have obviously shifted but I get the sense that the basic questions are more or less the same. It would make an interesting historical study, but not one I’m likely to embark upon.
Posted by Guy Merchant at 12:56 PM 2 comments: 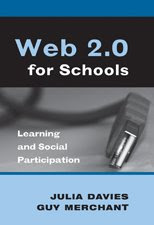 Well,the books out. It gets launched at AERA, but I won't really believe it till I'm holding it! That's interesting when so much I do and write is virtual, that there's still something about the book as a material object that holds the weight of significance. I know one friend remarked that a book on Web 2.0 is almost a contradiction in terms. Partly true I suspect. Also there's that strange phenomenon when you write about this sort of stuff that some of it is out of date before it gets out! But I'm confident that most of what is in the book is still current, and that the connections between new literacies and learning through participation remain valid. So alongside this I have a couple of book chapters making their way into print. These will be followed by some work on teens and SNSs which probably won't see the light of day until 2010. And then I have an idea for a solo book venture, so watch this space; and of course in the mean time order a copy of Web 2.0 for Schools: Learning and Social Participation (Davies & Merchant, 2009)!
Posted by Guy Merchant at 11:47 AM 9 comments:

Perhaps London’s G20 protest was a little unfocused and, of course, carefully policed but I was struck by the ways in which digital literacy practices were never far away. Some news sites had video footage up soon after the events themselves, mobile technology was much in evidence and there were Twitter feeds to follow the protest. In the TV news of police kettling that I saw, protesters’ cameras were very much in evidence. Why some groups favoured chalk instead of spraypaint to make their point seems curiously anachronistic. The Bishopsgate flash camp stole the headlines: it was well-coordinated and mostly good-natured. Don’t we all feel a little more at home with climate protest?
Posted by Guy Merchant at 7:25 AM No comments: