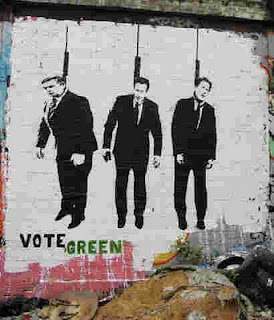 Ruth sent me this political comment on a hung parliament today via Blackberry Messenger. It was a good reminder of nearly-now connectivity and family networking. It didn't need a comment, she knew I'd like it. The theme continued for me as I tried to keep track of AERA delegates I know via mobile phone and text messages. And then I enjoyed listening to Amy Stornaiuolo and Glynda Hull talking about the Kidnet project. This is work that draws on social networking to create extra school/ school-based links between students in the US, India, South Africa and Norway. The issue of using literacies and multimodal representations to communicate cosmopolitan understandings across sites in an 'educational' way is interesting. I'm not sure at what point it ceases to be social networking and becomes educational networking, particularly when the public dimension often seen as a hallmark of Web 2.0 is removed. You can learn more here, where you log in with 'guest' and use 'space2cre8' as password.
Posted by Guy Merchant at 3:21 PM 1 comment:

A sense of one's place 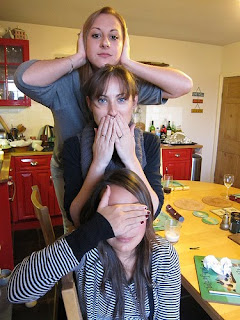 Restricted networks might serve to entrap socially excluded young adults. In a previous post I suggested that all the hype around Web 2.0 could be irrelevant to these young people. SNSs often thicken existing ties in localized networks and face-to-face friendship groups and so may simply compound social inequities. I felt uneasy with the concept of ‘restricted networks’ because of the deficit implied. In a way it could be more about a misapprehension of a ‘sense of one’s place’ which Bourdieu argues leads one to exclude oneself from places one is excluded from (1984:471). Then perhaps the discourses of exclusion circulate and solidify social position. The high point of an otherwise tedious transatlantic flight was reading Reay, Crozier and Clayton’s lucidly argued piece on working-class students in HE. From a very different perspective it deals with some similar issues about shifting identities, social networks and the tensions involved in crossing boundaries.
Posted by Guy Merchant at 3:37 PM No comments: 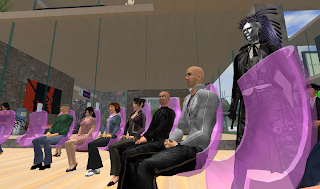 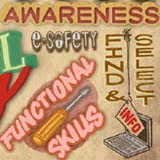 Yes, the tenth anniversary issue of the Journal of Early Childhood Literacy is out! It's got some great articles by Anne Dyson, Jim Anderson and colleagues, Kathleen Roskos and Elaine Reese and is well worth the read. We've had our ups and downs but its been a really productive venture. I've just got journal business cards from Sage, and they come with the little promotional quote 'a distinctive, leading voice in research in early childhood literacy, with a multinational range of contributors and readership' - well that just about sums it up! Congratulations to all who've been involved, contributing, reviewing and editing. And upcoming (10:3) we have a great Special Issue on Literacy and Technology. Watch this space; read JECL!
Posted by Guy Merchant at 1:23 PM No comments:

I have a chapter on UK teens' social networking as new literacy in this fine-looking volume edited by Donna Alvermann. As I'm looking back over the data ahead of this year's AERA conference in Denver, I've been struck by how the teenagers in my study were poised between the overlapping discourses of risk and experimentation. Their engagement with Facebook and Bebo was marked by caution. The social networking of some was monitored by their parents and they were all aware of the public nature of what they wrote - how universities, employers or new friends might read their pages in different ways. And they were also aware of some of the potential difficulties associated with friending 'randoms', particularly in the light of high profile media stories of stalking, grooming and worse. The teenage girls were accutely aware of how they presented themselves in their profile pictures. 'Pouting' was described as 'ridiculous' and some thought a head-and-shoulders shot should include some evidence of clothing 'just in case'. At times, reading the data, it almost felt that they were hypersensitised to risk through repeated doses of e-safety. Yet, interestingly, at the same time there was evidence of innovative and creative activity, playfulness as well as careful attention to managing sensitive social relationships and how these might be enriched, supplemented or mediated by their digital practices.
Posted by Guy Merchant at 10:31 AM No comments:

I still keep a few curriculum publications going. Earlier this year I did this on writing sci-fi stories, but the one above which Scholastic just brought out has a different history. It's based on my original ideas, developed at a primary school in Rotherham, but it's been updated by Pam Dowson. So it's only right and proper that it acknowledges the joint authorship. What does seem a bit strange though is that I've no idea who Pam is and, as far as I know we've never met! That's rather different from other things I've jointly and collaboratively written, which have involved lots and lots of discussion. I'm not complaining, I love collaboration but although this is clearly a joint enterprise I don't think it involved any real collaboration!
Posted by Guy Merchant at 11:14 AM 4 comments:

In a short break from the more serious blog reflections, here's YouTube working its magic again - lounge music from the archive, complete with some helpful subtitling. It makes it so accessible across all imaginable cultural divides. Well, most anyway! 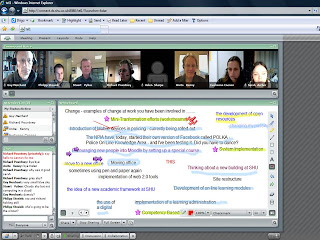 I really enjoyed the Futurelab event on Web 2.0 and enjoyed meeting so many enthusiastic educators. The discussions sparked a number of reflections about the role of Web 2.0 in education. Probably the most interesting was the realisation that it's a term I don't use much any more. Has it reached the end of its usefulness, or is it something that has simply been absorbed into my own repertoire? As more and more digital spaces follow the 2.0 trend perhaps it is becoming too familiar to us. It may in fact be more helpful to think about what not-2.0 is like and how that works. So the screenshot is last night's Adobe Connect session. 2.0-not, but slick and quite useful for that online meeting/learning and of course in a single session we'll quite seemlessly link to 2.0 stuff. That's OK; horses for courses. So in Wednesday's debates I was also struck by the tendency of the enthusiast to introduce a sort of moral imperative. My colleagues ought to do Web 2.0 stuff. That caused me to tweet again on the topic! Finally, I appreciated the re-introduction to the concept of personal learning networks and how this may or may not articulate with digital sources of professional development. Think on!
Posted by Guy Merchant at 2:54 AM No comments: