How open is open? 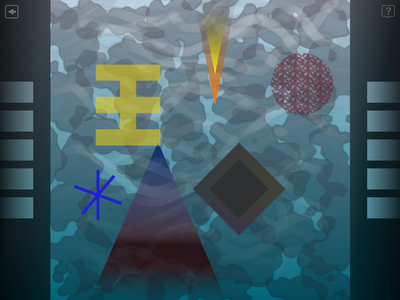 In 1996, when Peter Gabriel released the ground-breaking game Eve, he hit on a novel concept - players could remix, albeit in a rather basic way, some of the world music samples and accompaniments he had collected. The concept of interacting with, and then changing the music you listened to made the work more open and more playable. In a way, Brian Eno's app Scape does the same thing, combining all the wizardry of touch screen technology with Eno's characteristic creative flare. Scape is basically an album of 13 or so tracks of ambient music. But it's an album with a difference in which the themes and functions are open and playable. You quite easily become an active player of ambient music by rearranging the colourful shapes and abstract symbols against a background 'mood'. Here, Eno is developing the same sort of logic that lies behind his oblique strategies, in which you generate selections and combinations from limited sets of themes to create something novel. It's an appealing metaphor for openness. If a 'traditional' piece of ambient music is closed - closed in the sense that you have to listen to it in the way in which it was composed and recorded, then maybe Scape is open, because you have some creative degrees of freedom in how you play it. But of course, at the end of the day, it's always Scape and perhaps after the first half hour, breaking your ambient trance, you may decide that although it's pretty good, it's not really that open. What would be more open, then? A day in Eno's studio, perhaps. More realistically, more open would be working with the samples themselves - adding your own found sounds (using GarageBand?) or maybe working with the code behind it all. The capacity to customize, to alter, to modify, to remix or play the text is a key theme in new media, but it usually happens under certain constraints. Genuine openness must, by definition, be unconstrained and is perhaps creative at a more fundamental level. I don't want to belittle the advent of new levels of interactivity or the move towards openness with such a low entry cost, but I just want to suggest that there are some interesting subtleties in this whole debate; if indeed it really is an open debate.
Posted by Guy Merchant at 7:48 AM No comments:


Academic re-mix, or what - I laughed at this! It's not of course that we want to draw hard and fast lines between quantitative and qualitative paradigms, but some of the lines rehearse very familiar conversations - conversations that I've found myself with colleagues and friends. It seems like 'scientism' can be very emotive topic, and that's where the mash-up hits home. The emotive tone combines with excellently timed sub-titles. Just a diversion from real work, of course, just like fooling around for hours on Gif Control or plotting your moves on Path.
Posted by Guy Merchant at 6:32 AM No comments: 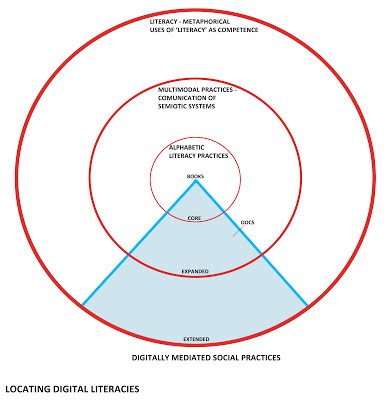 In preparing the open textbook for DefT we want to avoid getting mired in the seemingly endless debate over definitions of digital literacies (see here for example). So the pizza model shown in draft form is just an explanatory model for the ways in which digital literacies has been operationalised by project participants. Partly because of the concentration of literacy folk on the project team, there is some sort of desire to hold on to a view of literacy practices to describe those social interactions and negotiations of meaning that occur with, in and around semiotic systems. In the central region, what is referred to as core is the most conservative rendering of this - that is practices that depend upon alphabetic representation. So that is intended to include not only basic decoding and encoding, but also the whole range of communicative practices, sense-making, textuality etc whether this is on screen, paper-based or both. Although it is core, we are not, of course, privileging it in any way, merely indicating that is the most simple definition. The second ring acknowledges the way in which practices - and particularly, but not exclusively, screen-based ones - are increasingly seen as being multi-modal. This constitutes an expanded view of literacies. Ever since David Barton drew our attention to metaphorical uses of the word literacy we have had a useful way to describe terminology like 'emotional literacy', political literacy, 'scientific literacy' and so on. This sort of language is generally used as a metaphor to describe a sort of competence - and it's clear that's how some people see digital literacy and that's what's represented in the outer ring. So in the light of these ways of thinking about the way the word literacy is used (core, extended and expanded) we are able to conceive of digitally-mediated practices as literacies in different ways. When related to the case studies in our project work we can then see that teachers located their work in one or another of the concentric rings. However, in so doing their activities nearly always included stuff in the other rings (as well as work outside of the slice).
Posted by Guy Merchant at 8:16 AM 1 comment:

Don't think twice (it's all right) 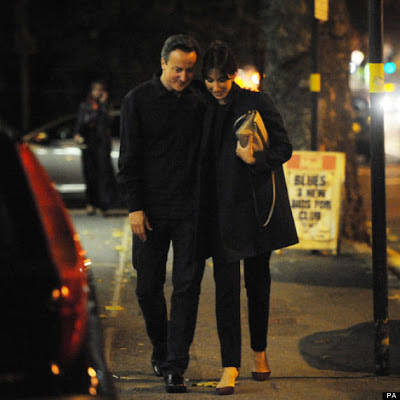 Ever since I came across this apparently innocent, 'off-duty' pic of our PM, I've been thinking about the issues it raises. You have to be of a certain age to connect it with the original album cover, but it's quite clearly a visual quote from Dylan's Freewheelin' cover which was released some 49 years ago. Visual quotes have become quite a theme in contemporary visual art and, of course, cinema too - Woody Allen is probably the leading exponent of this, but my personal favourite is Luis Bunuel's 'Last Supper' scene in Viridiana. (I'm not sure, by the way, whether to describe this as quote, parody or remix, but like citation, imitation and plagiarism in the written form, it's a phenomenon that is certainly worthy of academic scrutiny). But all this aside, what exactly is going on here? According to the Guardian newspaper, the photograph has been carefully set up by Tory party publicists as an explicit attempt to capture our leader in casual mode. That's the point at which all this becomes very subtle. So, assuming this is true - and there's no reason to doubt it - we have to begin questioning even the most seemingly innocent media image, that is to question its level of authenticity. The 'loving couple' in Dylanesque embrace may have just 'popped out for a curry' but the artifice suggests an attempt to create more....but more what? More of a sixties type counter-culture figure, surely not! Or is it trying to tap into something deeper, like a subliminal tilt at youthful romance by riffing off an iconic image deeply lodged in the memories of mature voters? If this is the case, then we might quite rightly recoil at an intention to subtley massage our political opinions. Actually, having said that, I'm not completely convinced  that is likely to alter my own attitudes to Cameron or to sway my anti-coalition political leanings, but maybe that's a different point. OK, well there's just one other avenue that opens up, and it's one that gives more positive credit to the photographer - a more innocent view. How clever, and how ironic to draw this visual parallel. All told, then, the image raises all sorts of questions; but of course the answer is blowing in the wind!
Posted by Guy Merchant at 4:36 AM No comments: 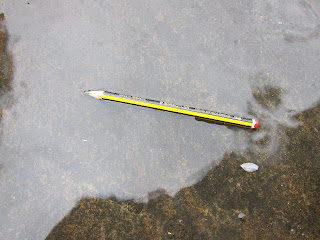 Journalists have latched on to Aric Sigman's polemic about the health risks of screen time on young children with gusto, even though it's widely acknowledged that negative effects are only 'possible'. The best response is buried in this report, in which Dorothy Bishop observes that 'His comments about impact of screen time on brain development and empathy seem speculative in my opinion, and the arguments that he makes could equally well be used to conclude that children should not read books.' So, maybe this isn't the end of civilization as we know it, we're not all going to hell in a hand cart. Let's here it for Peppa Pig!
Posted by Guy Merchant at 12:34 PM 2 comments:


The Effect of a Book, Extending Beyond The Form from João Machado on Vimeo.

This little video that draws attention to what our hands do when we read re-kindled my interest in the topic. It was shown yesterday by Doug Belshaw at the DefT conference, and it reminded me of when I tried to map out some of the new motor skills that constitute emergent literacies 2.0 (in 'Barbie meets Bob the Builder'), an interest I've shared over the years with Margaret Mackey. At that time I was just drawing attention to tapping keys, pointing and clicking and so on. But now, as our attention begins to shift to touchscreen technology, and in particular that associated with iPads and iPods we see a changing repertoire that includes pressing, tapping and swiping. As I've discovered, watching my 2 year-old grandson, these are quite nuanced movements. If you don't cleanly tap the icon of an app, you'll end up with a swipe - and a different result. I'm not suggesting that this is at all problematic, but it just underlines the fact that different literacy tools require different kinds of movements. I'm always getting my iPad gestures mixed up with my Kindle ones!

Posted by Guy Merchant at 9:38 AM No comments:

I've been on leave for a while, but back in time for the DeFT project conference which was a raging success! I'm sure there'll be more about the day on the project blog, but this is just to give a preview of Jack's excellent video record of the day and to capture a few things that might otherwise be forgotten. For me, an important message was the imperative to change practice in an environment in which changing policy might be more challenging. At the very heart of what we've been doing is encouraging active learning in which pupils and students produce and consume new meanings with technology. I've observed that the extent to which old or new literacies were used in project activity varied enormously, but was always there as teachers and their pupils merged the online/offline, teacher/learner, home/school, in-classroom/out-of-clasroom spaces. And they all exemplified safe, ethical and advantageous practice which invariably opened opportunities for critical digital literacies. OERs seem to me to have an important part to play in taking this work forwards. There are two important aspects of this: firstly, OERs foster the kinds of participation that are intimately connected with the 'mindset' and practices of web2.0 and digital literacies in that they enable us to personalise, remix, and add to knowledge and secondly,  in a rapidly changing environment in which resources and practices are fluid and ephemeral, they offer the possibility of regular updating and new forms of sharing. But beyond all this, there may be a deeper, political edge - in a time in which education is increasingly marketised, constrained and reduced, the open participative ethos of these environments may assist grassroots connection between teachers who are all too often separated by sector, by region, and by national boundaries.
Posted by Guy Merchant at 1:55 AM No comments: