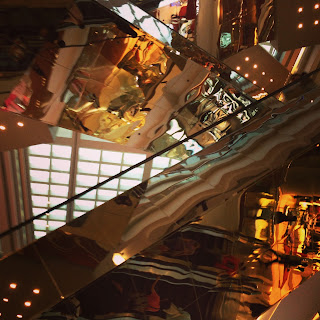 In our paper, Points of View, Cathy and I use some virtual worlds data to problematise a whole range of issues in literacy studies. Starting from the use of virtual worlds in classrooms a number of common assumptions about the material and the virtual; space and place; and even temporality are called into question. But we also go further than that to offer some alternative perspectives on researching literacies. In looking at this data, the whole notion of segmenting our observations into discreet events was a fundamental challenge and so we experiment in the paper with providing alternative accounts, or stories, which we suggest can 'stack up' in different ways. The theoretical dimension of the paper is inspired by Kwa's reading of the baroque. Following this we suggest that a focus on baroque complexity helps us to ask the important question: what else is going on here? In doing this it provides a useful counter-narrative to over-simplified conceptualisations of literacy. Read all about it over here!
Posted by Guy Merchant at 2:29 AM No comments: 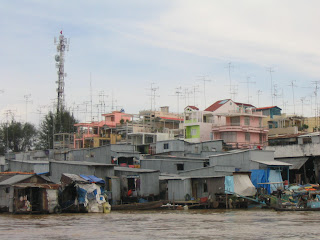 When you're travelling it sometimes seems that the whole of humanity is also involved in this restless journeying, burdened by luggage and the unpredictability of their arrangements, the regrets and sadness of departure, and the anticipation, or otherwise, of arrival. Dragging their stuff, rushing, waiting, trying to negotiate complex information, dealing with other languages, unknown currencies and the inadequate approximation of translation. This movement of people is a communication - in fact transport systems are often described in this way - and the exchanges that occur as a result of it involve sharing stuff, giving stuff, getting new things as well as loosing or forgetting what is dear to you. The communication of human travel is embodied and materialised. It also takes place across space and time, and this is so eloquently captured in Doreen Massey's essay 'Some Times of Space '. It is similarly comprised of convergence and divergence as well as by the inclusions and exclusions wrought by the distribution of power. And yet, when we return 'home' , what have we got to show for it? Well we may return with something substantial, something we purposefully went to get, but more often than not it is with a small souvenir, or perhaps just a jumble of recollections, the feeling that we've changed in some subtle and indefinable way. The communication was often an end in itself; the subtle change, the intangible was a little like learning, hard to define, difficult to articulate a shadowy form in the mists of memory.
Posted by Guy Merchant at 12:54 AM No comments: 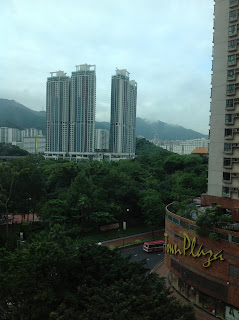 I'm really enjoying the Fifth International Roundtable on Discourse Analysis with its focus on Digital Practices. Presenters have brought a wide variety of perspectives to a wide range of topics. There have been different takes on discourse itself and work that's focused on mobile technologies, machinima, MOOCs, Flickr, 'netspeak', virtual worlds, self-quantifiers and the comment genre - to mention just a few. Today is the final day and there's the unknown dimension of what themes will arise and what new questions will emerge. I always find that an interesting process. At the moment all that I've heard re-inforces the view that thinking about the online/offline binary is unhelpful. In some way's David Barton's notion of 'writing spaces' works a little better for me. The whole debate also confirms my belief that studying practices without a close look at people and things leaves out the complex and messy nature of the work that gets done. So materiality, embodiment and affect seem to me to be important emergent themes. But, as ever, what I think may well be modified by what others say; if it isn't, perhaps that's not discourse.
Posted by Guy Merchant at 5:40 PM No comments:

Five years ago, convergence technology was the real buzzword, and with early smartphones we began to see this on the high street - the phone was the camera, was the MP3 player. We're so used to that now that the powerful handheld device, aka smartphone, is often referred to in terms of its computing power and its internet capability. Early critics of iPhones often complained that it was good with media, but not wonderful as a phone. That's changed quite a bit over the years, but there is still a recognition that in order to get all that computing power into a small space some compromises have to be made. Commonly these compromises are about battery life and signal transmission/reception. Most people probably just live with this, but others have begun to invest in a simple phone too, so that they have at least one thing that works well. That's all very well, but as I pack for a trip to Hong Kong it's a logistical nightmare making sure I've got my phone, my camera, my iPad and my laptop and all the various leads and cables (each being completely different, of course). So, actually I'm a big fan of convergence technology, just because it makes life simpler, but it does seem that there's a way to go.
Posted by Guy Merchant at 2:04 AM No comments: 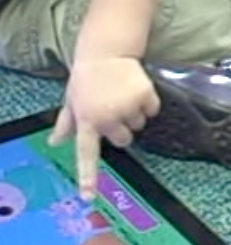 I've just been writing another paper about toddlers and touchscreens, and it returns to the same themes about gesture that I explored before. Essentially, looking at the video data we have, you see how hand gestures and pointing are woven into adult-child conversations and that they also appear to extend quite naturally into taps and swipes on the touchscreen. Often someone starts off pointing at something on the screen and then ends up tapping - it becomes part of the interactional flow. And the toddlers (see index finger in pic) often seem to have their trigger fingers at the ready, perhaps mimicking adult gestures or maybe in readiness for when they need to deploy them. I'd been using the word 'index finger' so often in the writing that I began to wonder about its origin. For one feverish moment I thought it was connected to print literacy, being the finger that turns the pages at the index. But in the end I was convinced by this account, which simply connects it with indicating or pointing. Well even that is enough to confer on it a very significant place in human communication. I reckon there's a book to be written about the role the first finger plays in human culture. Someone's probably already written it, though.........no, just got lost at Amazon only to discover that someone called Al Fingers has written a book on Clarks in Jamaica (bring on Vybz Kartel). How random!
Posted by Guy Merchant at 12:21 PM No comments: 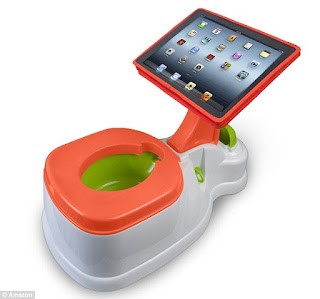 The BBC has quite a knack of digging out enthusiastic and slightly potty boffins to drive their distinctive brand of middlebrow edutainment. These characters seem to race around various glamorous locations in the UK, and elsewhere, talking nineteen to the dozen about their favourite idea. (Why hasn't anybody ever discovered me I wonder?) Returning home, I just had to catch up with the latest, Adam Nicholson - a historian with impeccable qualifications - who dazzled viewers with his take on literacy in  seventeenth century England. It was, or so the title goes, the century that wrote itself and he had lots of quirky examples to illustrate this idea. Although very entertaining, the major shortcoming was its rather narrow determinist view. That's the way we became modern: through literacy, through individual expression, from discovering the power of writing and so on and so forth. Major social, political and religious changes were relegated to the sidelines in these programmes- as if they were simply caused by literacy rather than intimately bound up with it. Power, and that century's particular shifts in economic and civic life were always hovering in the background: class, gender and race reared up as another version of how we became modern. Nonetheless this is better than a lot of TV, and if you're in the UK you might still catch the series on demand on iPlayer.
Posted by Guy Merchant at 1:19 PM No comments: