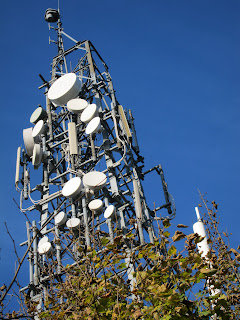 I've been reading David Parry's call for what he calls ‘mobile literacy’ (here). He identifies three areas of focus. These are understanding information access, understanding hyperconnectivity and understanding the new sense of space. The first is about encouraging students to use mobile devices to search for (and presumably evaluate) information, and to appreciate the differences and similarities between this and desktop searches. Hyperconnectivity is about using and understanding how social media can connect learners with those outside the immediate classroom context in advantageous ways (selective use of Twitter is offered as an example). And finally, the new sense of space is about developing an appreciation of how mobiles can be used to mediate one’s experience of the material/physical world through so-called augmented reality applications and the whole gamut of data-enriched geo-location.
Posted by Guy Merchant at 12:28 PM No comments: 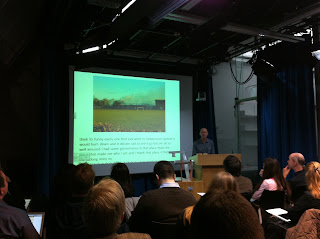 This is me at Monday's conference. I didn't notice anybody take a picture (not that I mind), and then I found it later on in the week on the Cloudworks site. So I've re-appropriated it - but in so doing I was aware of the complexity. Does someone else own that image? Is it the person who took it ... or does it belong to Cloudworks? And then in an instant, by clicking it, I reclaimed it, and now decide to upload it to my blog. Mmm...now Google owns Blogger, and so is it the case that Google owns my image, as well as my thoughts, and my searches? In the end it's not very important to me, but in a week in which the Leveson Inquiry into phone-hacking and media intrusion has heard some frightening testimonies from those who have been pursued, you can't help reflecting on the underlying issues - the ease at which images can be captured and distributed is only one of these. Intent and affect must come into this though. John (yes, I think he was the clicker in question) meant no harm, and I certainly didn't feel any. So everything is OK; but when does this cross the border into become not OK? I hasten to add that I'd already given my permission to being video-recorded, and I have no problem with anyone's conduct at the event - I'm just reflecting on the issues! Cut and paste these words at your peril!
Posted by Guy Merchant at 7:52 AM No comments:

Mobile practices in everyday life
View more presentations from edsghm
I really enjoyed speaking at the SoMobNet roundtable - it was great to be part of the conversation. You can tune into some of the debate on cloudworks, but I think you have to join to comment. I learnt about some interesting work across European and in one instance beyond Europe. Joining together perspectives from learning, Web 2.0, media and technology made it a rich fare. My slides probably make little sense without the narrative, but that's how it should be!
Posted by Guy Merchant at 12:42 PM No comments: 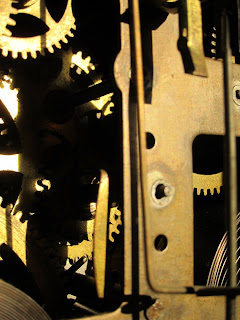 There are some quite persuasive arguments about how narratives shape our view of the world, and recently I've been thinking about how researchers' narratives help to create the field. In digital literacies our narratives are often future-focused, in that they attempt to imagine the next generation of technology, or the skills that will be needed in the twenty-first century workplace. These narratives are shaped by other imaginaries, in which we are always being drawn into the future, rather than propelled by the past. I caught part of Lucy Powell's History of the New on the radio, in which she locates the Industrial Revolution as the point at which a 'cult of newness' began to challenge the authority of tradition. Gazing at the future is the hallmark of modernism, and it seems that the pull of the future still disciplines our thinking. There's an interesting synergy between this fascination with newness and the ethos of consumerism. In an era when the past was best, and when things were made to last one would have little interest in new fads and products; now we are always on the lookout for the next generation, the next version and so on. Why darn it if you can buy a new pair? Why make do with the existing pair when the new ones are so much better? We're sold newness in the guise of improvement. The concept of advantageousness, which I've been playing around with quite a lot lately, is a slippery beast - but I think it helps to ask the question - it gives a much-needed critical take. At least if we ask what are the advantages of a Kindle, for example, we can justify our purchase! And then we can take that further, and ask under what conditions it is advantageous, who is it advantageous to and so on.
Posted by Guy Merchant at 7:51 AM 4 comments: 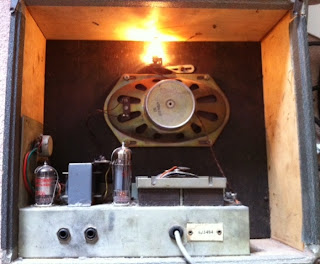 Mobile technologies suggest mobile subjects, and it may be that we best see these devices springing into life, as it were, when we too are mobile. Take railway journeys, for example, they are punctuated by the beeps, pings and buzzes of mobile message alerts - the ringtones that are familiar, more or less the same, or perhaps unusual - but still recognizable as such.
Posted by Guy Merchant at 7:09 AM No comments: 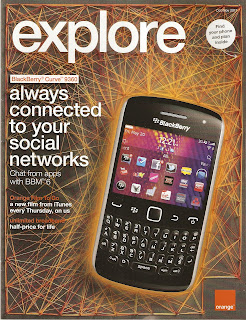 The October issue of Orange’s Explore magazine is out! Pictured above, you'll see that the background image is a dense mesh of intersecting fibres. Their fiery yellows, oranges and reds criss-cross to form an image that calls to mind familiar diagrammatic representations of social networks. The device itself - the Blackberry Curve - appears to glow, as a live hub, in the centre of these interconnections. It promises that you will be ‘always connected to your social networks’, and you can be sure that the social networking icons of Facebook and Blackberry Messenger (BBM) are displayed on the screen. They are; and what's more, the icons are tagged with the white star on a red circle that indicates that new messages have arrived! You consume. They produce.
Posted by Guy Merchant at 4:10 AM No comments: 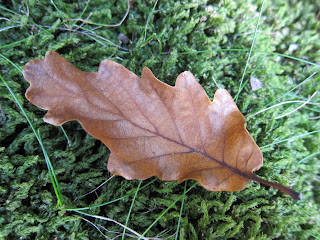 I found John Naughton's article (from last July) useful in thinking about the ways of the mobile market. Are mobiles becoming the ultimate symbol of a consumer society - an overpriced toy with bags of gadget-appeal or are they not just an object of desire, but a really useful thing to have? Naughton warns us that 'we are on the slippery slope towards a much more controlled, less open, internet. If these trends continue, then it won't be all that long before a significant proportion of the world's internet users will access the network, not via freely programmable PCs connected via landline networks, but through tethered, non-programmable information appliances (smartphones) hooked up to tightly controlled and regulated mobile networks. And if that happens then the world will have kissed goodbye to the internet's revolutionary potential.' I think he identifies a trend - but it's one among many. In a sense, if you can connect to anything, you just experience the advantages of mobility, but then again you may be paying for it!
Posted by Guy Merchant at 7:15 AM No comments: