Posted by Guy Merchant at 2:53 AM No comments: 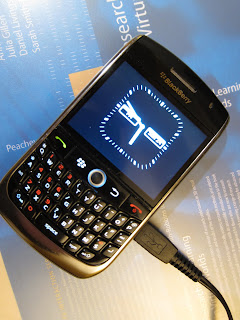 On Friday I found myself syphoning colleagues from 3 different trains into 2 different minibuses in order to make a decent start for Seminar 3. It was really easy to do this as well as to reassure Tetra back at the university that everything was in hand! Easy because of the way in which mobile phones facilitate micro-coordination. That, and the fact that we had a presntation on phones, led me think how taken-for-granted the mobile has become. It's a potent symbol of connection (often laid on the table in face-to-face interaction as if to represent wider networks) and it's also a talisman of security (when you're alone, in the dark, or about to break down, or all three). Writing about mobile connectivity, Gergen notes how phones 'emphasise and underscore the importance of connection as opposed to autonomy, looking outward rather than inward; toward network as opposed to self-sufficiency ... With the mobile phone the relational net is always at hand ... As a material object, the mobile phone functions as an icon of relationship, of techno-umbilical connection. The Enlightenment paen to individualism, "I think therefore I am" is replaced with "I'm linked therefore I am". (Gergen 2002:109)
Posted by Guy Merchant at 3:52 AM 1 comment:

Seminar 3 of the ESRC Seminar Series raised lots of interesting issues about overlapping 'worlds', 'spaces', or 'realities' associated with technoliteracy practices. Speakers included Christine Greenhow, Paul Coulton, and Keri Facer. Although we'd billed the session as addressing the topic of mixed reality, that term soon got pluralised, augmented and generally pulled about. I was left thinking about ways in which reality is layered with varying amounts of textual mediation, with the textual including all modalities. Now I'd normally feel more comfortable talking about multiple realities in the plural, but in this instance I am unconvinced that virtual or technosocial spaces actually constitute separate realities. So, provisionally I'll stick with the singular layered and textually mediated description. Virtually (!) at the same time we engaged in the familiar identity debates - another easily pluralised concept. Here I find myself moving away from any conception of fixity (the core difficulty with the performance metaphor) drifting ever closer towards what Gergen describes as 'relational being'. To quote: 'The bounded and centred self is undone.' (Gergen, 2002:6)
Posted by Guy Merchant at 10:13 AM No comments: 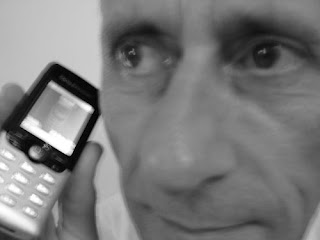 This amateur linguist has developed an interest in collecting the expressions we use when technology interrupts the anticipated smooth flow of events. Take phone conversations as an example. Mobile reception is notoriously patchy on trains as they weave their way through tunnels into cuttings and alongside tall buildings, so you’ll regularly overhear high-powered business conversations or the more informal everyday domestic exchange interrupted with 'I’m losing you' or 'You’re breaking up'. These are interjections which in another context might seem rude, incongruous or even incomprehensible. Another example is when colleagues are giving a presentation at a conference or seminar and their slideshow suddenly goes pear-shaped and delivers the wrong image. Some complex and abstract theorizing will be abruptly juxtaposed with 'That shouldn’t have happened' or 'Oops! I’ll just go back'. These disruptions have a humorous dimension, but the mere fact that we don’t usually laugh or take umbrage when they occur reveals something important. That is, they are so common place that they have become quite unremarkable. No-one I know has misinterpreted 'I’m losing you' (it's not a life or death matter or a signal that a relationship is about to terminate) or I’m sorry I’ll have to go back' (back where - step backwards, go home, go back to basics?). There is in fact a shared understanding that these things happen. Things go wrong. And these represent the moments when the transparency of technology shifts and, perhaps only for a moment, the medium itself comes into focus. Talk shifts from the mediated topic to the topic of mediation. I’ll be cutting out in a minute...I just missed the nail and hammered my thumb... Am I losing you?
Posted by Guy Merchant at 4:25 AM No comments: 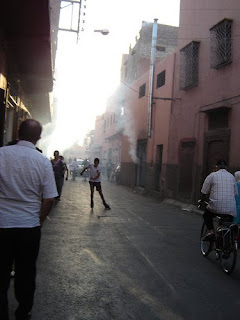 Connotations of 'nearly', 'as if', or 'almost' readily associate with term virtual. Although the word has some more specific dictionary definitions as well as some more recent technical ones I think these everyday uses are a good starting point for theorising the virtual. Reflecting on the Avatar experience, I’ve been thinking how the whole way in which flat representations take on the semblance of 3D is an important aspect of the virtual. So the mathematical calculation of perspective, the idea of the vanishing point - in fact the whole history of representational art from the Renaissance onwards is conjured up. Culturally we have adapted to representing and reading space in a particular way. It seems perfectly natural to perceive depth of field - but is it really culturally acquired? We readily assume the first person point of view of the artist, the photographer or the camera. And at that point is what we see virtual? Does the medium become transparent? Bolter and Grusin (2000:25) when talking about this suggest that: 'If executed properly, the surface of the painting dissolved and presented to the viewer the scene beyond.' The project could be seen as one of becoming immersed in an alternate reality by forgetting that it is mediated in the first place. That's my experience of good theatre - I begin to forget the audience around me, that actors are just doing their job and so on - I'm temporarily 'in' the world that is unfolding.
Posted by Guy Merchant at 4:08 AM No comments: 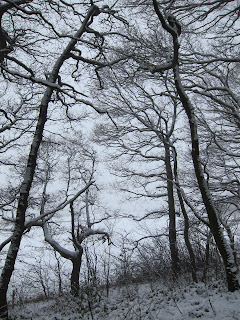 For more, you’ll have to wait for the book!
Posted by Guy Merchant at 3:34 AM 1 comment:

The Avatar film will no doubt bring the contemporary avatar concept more squarely into the popular imagination. Certainly in 3D, the film gives a heightened sense of motility and presence, but one is also struck by differences in control in comparing this to a 'real' avatar experience in SL. In SL your intentionality is expressed through keyboard and mouse and in this sense you are more active; in the 3D movie it all happens to you. That said there is of course more action. More things happen to the avatar in the movie. Apart from the occasional push script in SL, you navigate your way around a comparatively static world. I’ve yet to try Avatar the game, but I am tempted. I left the cinema with a little disappointment with the plot (I didn’t expect a lot) but also the idea that we now should be able to have a similar visual experience with our own avatar. That would be nice.
Posted by Guy Merchant at 1:47 AM No comments: