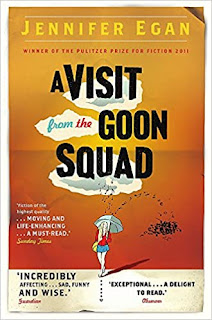 If you'd told me that the novel I was about to read contained over 60 pages of Powerpoint slides using some of the standard insert graphics you get, I think I'd change my mind and pick something else. Haven't we all had enough of Powerpoint? Surprisingly though, Jennifer Egan makes this device work so well in A Visit from the Goon Squad that I actually found myself really enjoying it. It's one of the many small triumphs in this Pulitzer Prize winner - a work that is packed full of insights and intrigues. I'd missed it when it won in 2011, but came to it late through the first chapter, Found Objects, which appeared as a short story in the New Yorker. It could be argued that the freestanding piece Found Objects has the edge. After all, it's tightly written and only hints at the broader landscape of events. In that sense it's more open for the reader. You can speculate all you like about Sasha, the focal character, about what is lost, found or stolen in her life and the fragmented dialogue with her therapist works very well in prompting this sort of perspective. I like the economy of the short story form for some of these reasons. I think George Saunders writes about making every word count in a short story - and that's why Found Objects works. Egan's stand alone tale raises all sorts of questions most of which are answered in the novel, so I suppose if you're the sort who hopes for some sort of closure in fiction you'd prefer A Visit from the Goon Squad; but both are very good. After several unsuccessful attempts to surf the wave of enthusiasm for Richard Powers, Egan has re-established my flagging confidence in American fiction.
Posted by Guy Merchant at 3:00 AM No comments: