Return to the series! 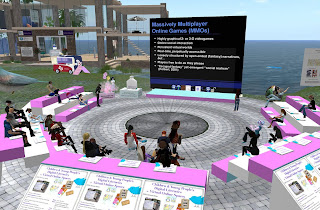 Computer problems interrupted my sequence of posts on the ESRC seminar series final conference, but fortunately in the meantime the wonderful Sheila Webber has gathered together a range of resources. There's a set of pics on Flickr (I stole the one above), a chatlog, and a couple of YouTube videos. They're all linked from Sheila Webber's blog, please have a look. It's an excellent record of the event.
Posted by Guy Merchant at 12:05 PM No comments:

I notice that yesterday's Prezi doesn't always show up. It seems to in Firefox and Safari, but not in Explorer. Strange. So today I'm showcasing a student video that should work...I think it's really good! Does it link well to the second seminar series theme? Well it might, and that all depends on your conception of literacy. Recently Gillen and Barton (2010) seem to have been quoted a lot, defining digital literacy as 'the constantly changing practices through which people make traceable meanings using digital technologies.' Throughout the series we have been examining these practices, noting their multimodal nature and the ways in which the boundaries between reading and writing, between production and consumption are repeatedly blurred. It's also become apparent that within many digital environments the text is not only multiple but contains individual points of view. Each inhabitant sees and experiences Second Life from a unique perspective; no two Twitter streams will look the same, an so on. Point of view becomes an ever more important dimension as readers and writers construct their own journeys through the textual landscape. Along with this we've noted the development of new narrative vehicles and encountered complex questions of authorship, and repeatedly asked how these new kinds of texts map on to curriculum areas like media studies, English, drama or literacy. So in some ways, Helen Nixon summed it up when she asked how far can we stretch the term literacy before it ceases to be useful?

Posted by Guy Merchant at 12:34 PM No comments:

What is the virtual, anyway?

In virtual worlds on Prezi

In virtual worlds on Prezi - these are the four themes that seem to me to have dominated the virtual worlds seminar series (link). I'm just taking the first today, which is the problematic nature of notions of virtuality. I considered applying Lefebvre, because in a sense some virtual worlds seem to work in opposition to other spaces (heterotopias) and others seem to mirror them (isotopias) - but this sort of analysis hinges on the distinctiveness or even the separation of the virtual from the everyday and the series has made me question this. So that drives me back to interrogating the concept of the virtual. So we think of the virtual as 'almost', an approximation or a movement towards something more real; we regard it as an 'as if' world, a simulation of the more familiar, it is 'quite similar' to the everyday, but always, as Deleuze and Guattari suggest it is defined in relation to 'the real'. In our uses of the term virtual, the word reality is bracketed or elided. On Saturday I suggested that one of the most common uses of the word was in describing a virtual learning environment - a place where virtually no learning at all takes place! But our discussions on the virtual took us further on as we saw that many non-digital experiences shared the same charcteristics that have begun to associate with the virtual. Viewing film, immersive book reading, drama, role play and fantasy games are good examples of when an imaginative parallell world is conjured into being...and these sorts of experiences are interwoven with mundane reality just as virtual world gameplay is. Players and inhabitants of the metaverse engage in multiple textual worlds in which the distinction between online and offline becomes arbitrary. Constance Steinkuehler's 'constellation of literacy practices' is a very helpful description of this. There is a continual to-and-fro movement between RL and VL which suggests that any distinction between the two should be more precisely defined than we have tended to do so far. 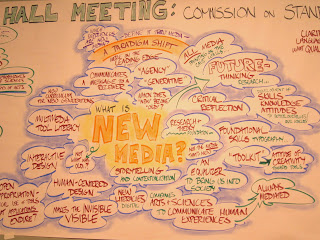 Yesterday's conference ended the ESRC Seminar Series in an appropriately celebratory style in Second Life - attracting a varied and engaged international audience. In the morning I had a brief spot, summarising some of the main themes that have emerged in the course of the five seminars and I'll be posting that up in the next couple of days. For now though, my immediate impressions are of the different ways in which research is addressing children and young people's engagement with virtual worlds. There are 3 basic orientations. The first is simply to plot what's going on in the metaverse - essentially various interpretations that look for demographics beneath the general statistics offered by organisations like K-Zero and the Kaiser Foundation. There are some built-in difficulties such as the shifting allegiancies of age groups, the problem of determining regional variations and how to look further than statistics about the number of accounts. In a rapidly changing market there is a danger that by the time you publish it your data is out of date. The second orientation is to treat virtual worlds as texts, to look at their social affordances, their communicational possibilities or the identity positions that they offer to inhabitants and visitors. This holds considerable fascination and offers all sorts of challenges - perhaps the greatest of which is how to produce an account that takes into consideration how children and young people read or read against these texts, what sorts of resistance, subversion or parodic uses they create. The third orientation is to try to understand the sense and the meanings that these users actually make as they enter virtual worlds, how they evaluate the experience and their own levels of sophistication and critique. Here there may be a degree of rich description, but the usually difficulty in saying anything that is more general - which simply goes to illustrate that these orientations are by no means new, and simply reframe existing challenges in how we interpret and understand textual landscapes and the interactions that take place within them.
Posted by Guy Merchant at 9:53 AM 3 comments: 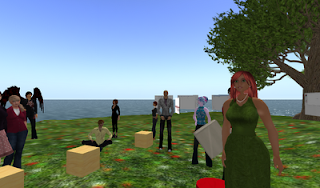 It's the final conference of the ESRC Seminar Series 'Children and young people's digital literacies in virtual online spaces' at the University of Sheffield on Saturday. We have a great line-up with presentations from Victoria Carrington, Cassie Hague and Sarah Payton from FutureLab, and Bill Lord. Paul Coulton will be orchestrating some mobile mayhem. In the afternoon the conference migrates to Second Life where we have Peggy Sheehy, Rebecca Black and Constance Steinkuehler. If you can't join us in RL the conference venue in SL is here. That's 2:00pm BST on the InfoLit Island. It'll be a great event!
Posted by Guy Merchant at 12:58 PM No comments:


Gus Andrews was very entertaining at NMC. She spoke about the making of The Media Show with some examples (not this example I don't think, but I chose it because I fell for a number 5). You can find out more here. This constitutes a particular approach to critical media literacy - perhaps, at route it's an inoculation model, but I must say I like the way it's done.
Posted by Guy Merchant at 5:08 AM No comments:

Today was the end of NMC 2010. The final keynote by John Seely Brown was a thought-provoking look at non-formal learning, with the suggestion that this involves the same dispositions (habits of mind) that are at the heart of 21st Century learning with new media - debatable but interesting. The conference has been dominated by video presentations and projects, like the one above, which has some interesting contradictions. I'm sure the kids enjoyed the choreography and the opportunity to dance, wave books and work to the BEP song. But the project enlisted the so-called new media to promote an old medium (nothing wrong in that), yet no-one is actually reading or really demonstrating any of its benefits!
Posted by Guy Merchant at 3:51 PM 2 comments:

In yesterday's opening keynote at the NMC Conference, Mimi Ito was as thought-provoking as ever. The 'hook' for the audience was the webcam lipsync meme on YouTube as an instance of new media practice. Apparently having its genesis in Gary Brolsma's Numa Numa with its 37 million views, she used the example and its subsequent development to make points about production and learning. Posing the question of how, as educators, we can leverage informal learning and develop critical media literacy.

Mimi's 3 themes were the movement from originality to appropriation; stocks of knowledge to flows of knowledge; and assessment to reputation, the last of which was illustrated by the AMV work and these were set against the backdrop of blurring boundaries between school/out-of-school, popular/mainstream culture, formal/informal learning and so on. We wondered whether her 3 themes really did capture something new or whether they are better conceived of as a continuum for mapping specific kinds of activity and engagement.
Posted by Guy Merchant at 7:30 AM No comments:

This is an interesting short video that includes mobile phones and QR codes in some school science work on water quality. The traditional teaching looks a bit scary, but the students seem to be engaged in some good quality learning in which technological tools serve a useful purpose. This is part of a suite of projects hosted by the Centre for Learning and Technologies at Linnaeus. Full details are available here.
Posted by Guy Merchant at 4:22 AM No comments: 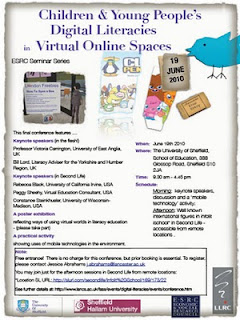 I've been reading Matt Locke's blog recently. Matt is Channel 4's Education and New Media Commissioner. Being an enthusiast for typologies and lists I'm rather taken with his six spaces of social media. It's an idea he first came up with three years ago, but it still works. The six spaces are secret spaces (SMS, MMS, IM), group spaces (Facebook, Myspace, Bebo), publishing spaces (Blogger, Flickr, YouTube), performing spaces (Second Life, World of Warcraft), participation spaces (Meetup, Twitter) and watching spaces (mobile tv). Here's the original post. And in the pic you'll see the poster for the amazing ESRC Seminar Series dissemination conference. This, in true style, will happen in a number of spaces - face-to-face in Sheffield, on Twitter, and in the afternoon in Second Life (here).
Posted by Guy Merchant at 11:18 AM No comments: