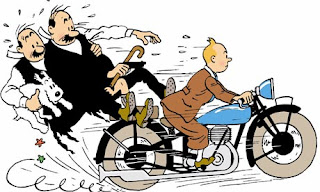 The Spielberg/Jackson Tintin certainly does 3D CGI animation well. But the movie hasn't gone down well with critics in the UK for two reasons: firstly, and this is an old debate, because it dumbs down Hergé (see Lezard here) and secondly, because of the CGI effect itself. I find the latter more interesting because I've been writing about visual realism, using Bolter & Grusin's (2000) notion of 'transparent immediacy'. They suggest that media-technology is advancing towards ever more life-like representations. So one critique of Tintin brings in Masahiro Mori's idea of the 'uncanny valley'. This idea suggests that the closer that representations resemble the real, the more that small inaccuaracies will derail us. Actually that didn't happen to me at all, but I'm glad to have learnt about the valley. You can read about that here.
Posted by Guy Merchant at 1:26 AM No comments: 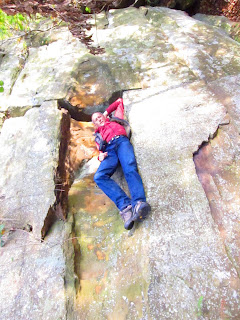 A number of commentators have drawn attention to the symbiotic relationship between popular narrative and technological innovation. The ways in which these stories are told relates strongly to the cultural legacies appropriated by the teller; it is possible to tell stories of the construction of virtuality that derive from Scandinavian fairy tales, from early Soviet science fiction, and from a variety cinematic genres. If narratives of hidden kingdoms, parallel universes and alternate realities capture our imagination - and the evidence is that they do, then it is entirely predictable that virtual worlds (or online gameworlds) might do the same. At least in part, radical innovations such as virtual worlds have been shaped by wider cultural narratives.
Posted by Guy Merchant at 7:34 AM No comments: 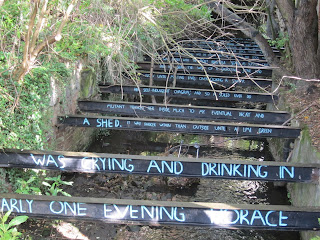 As we embark on an exciting new JISC-funded project 'Digital Futures in Teacher Education', the old challenge of defining what we mean by digital literacy has raised its head once again. In Writing the Future, published in Literacy in 2007 I argued the case for digital literacy as a kind of writing - one that was largely dependent upon alphabetic representation. Although the argument conceded that what counts as writing has expanded with new technology, it was, in hindsight, quite a tradional view. In that paper I also acknowledged that writing is now commonly found in the company of other forms of representation - in other words one couldn't avoid what the multimodalists were saying! My motivation was to save digital literacy from the technologists and to claim it for the literacy experts, who in my opinion have a far more sophisticated understanding of meaning-making. I also wanted professional literacy educators to wake up, and face up to the changes brought through the emergence of digital communication. But in four years, quite a lot has happened. For a start practice in educational institutions has changed quite a bit (although perhaps rather unevenly), but also the digital literacies movement has taken on a life of its own. A significant aspect of that is widespread discussion about digital literacy in the university sector. I'm not sure whether all the interpretations that have subsequently become attached to digital literacy are helpful, but nevertheless I feel obliged to revisit my own ideas. There's something about these versions of digital literacy that don't quite work for me. Well, let's say that firstly I'm not happy with skills, and secondly I'm not happy with the recursive argument that digital literacy is about preparing people to praticipate in a digital society. But, on the other hand it's easy to complain - I haven't got my new version completely thought through yet! I can see, though, that it will have the following ingredients: a new mindset (after Lankshear&Knobel, 2011); choice and creativity (Willett, Robinson &Marsh, 2008); meaning-making and social participation (Davies&Merchant, 2009); interlinked or networked spaces (Burnett, 2011) and maybe even something about new kinds of writing/reading (Merchant, 2007). That's not enough yet, but probably enough to suggest a different sort of emphasis.
Posted by Guy Merchant at 2:09 AM 1 comment: 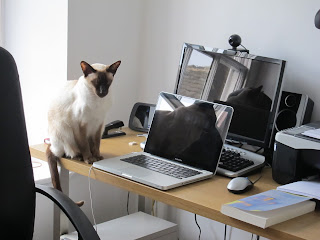 It was great to meet Stephen Kemmis yesterday, ahead of my visit to Charles Sturt University. In his seminar,Stephen gave a lucid account of his theory of practice: the architecture of practice, and ecologies of practice. The inter-related dimensions of 'saying', 'doing' and 'relating' work well as an account of literacy practices, particularly when studied in their 'natural habitat'. I was particularly drawn to his idea that practices have a life of their own - one that weaves its way across time and place. I also felt that the 3 dimensions provide a useful lens for looking at the processes that constitute academic literacy practice. Like one or two others in the audience I wanted a stronger account of how power patterns practices. By doing away with the mediating influence of social institutions that you find in Bourdieu, Kemmis's theory needs a stronger account of how practices reproduce values, ideologies and unequal distributions of resources.
Posted by Guy Merchant at 12:44 AM 1 comment: 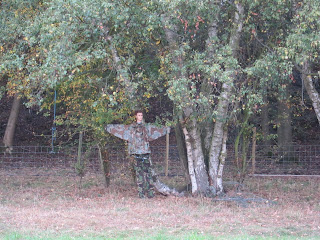 I'm back on Verbeek now, and quite appreciating the critique he makes of Latour. There's no doubt that he knows his way around the old actor network stuff, and there's a good survey of the ideas. I like the basic quote he pulls out from Latour: 'You could as well imagine a battle with the naked bodies of the soldiers on the one side and a heap of armors and weapons on the other' (1997:77). And he uses this to summarise why it is so problematic to separate humans from technology. This is the point on which Ihde builds when he says: 'Were technologies merely objects totally divorced from human praxis, they would be so much 'junk' lying about. Once taken into praxis one can speak not of technologies 'in themselves', but as the active realtional pair, human-technology.' (Ihde, 1993:34). This line of argument allows Verbeek to shift our attention to the ways in which humans and their devices shape each other. Good stuff.
Posted by Guy Merchant at 3:45 AM No comments: