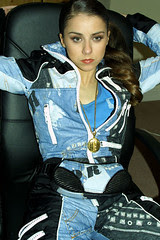 Lady Sovereign is hacked off about being called a chav. And, now it's official, the whole chav thing just recycles class prejudice as I suggested here. The Chavscum website is particularly distasteful with its references to the '˜peasant underclass' (here if you must). So, Julie Burchill is a controversial figure at the best of times but her celebration of Chavdom (last night on TV) is one of the more intelligent bits of Sky One programming. OK, she got angry, but I think her argument, summarized here, is right. And she gave Lady Sovereign a different voice. 'I mean I'€™ve seen things,' said the DJ, '˜and they probably live in Chelsea, and all they see is buses going past and that lot.' They, of course, are those re-inventors of class prejudice (the real chavvies) ... Rule Britannia?