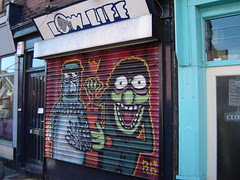 Still not a clue what to find behind the shutters of Low Life: the only way is to go and have a look. There’s so much I don’t know, but then I do know exactly what’s been on the radio and, what’s more I can hear it now, too.

Episode 1: Fed up with her limited life after a long marriage to the bowls-playing retired sweet salesman William, Margaret Collins decides to start her own on-line diary, or blog. At first William thinks this is just another of Margaret's fads. By the end of Episode 1, Margaret has 1 reader.

Woman’s Hour has been a national institution for as long as I can remember. Nevertheless, as a radio magazine it often manages to include leading edge features. Not that The World of Margaret falls into that category. This week’s Woman’s Hour drama strand just illustrates the increasing domestication of blogging culture.

By Episode 5, we learn that: William’s blog proves a perfect complement to Margaret’s – at first. But early one morning, William discovers an unwelcome message from his wife. And so this shows how the blog has been recruited as a literary device, as the journal has done since Defoe’s time and probably even before then. Nothing new there…but shouldn’t I be working at 10.45 am, not listening to Woman’s Hour? Not now I can listen anytime anywhere!

You are such a new man Guy. Despite your name.
Not only do you listen to Woman's hOur; but you admit it.
No wonder we all adore you.

Perhaps you were brought up on Listen with Mother too? I used to love it. Da-da-da-da-da-da-da....
My mum occasionally asks me how my blag is going. Nice one Mum.

Aaah, Listen with Mother...bring back the Home Service and the Third Programme! So, obviously not a new man. For confirmation of this look out for next Wednesday's posting :raises reader anticipation/eyebrows: