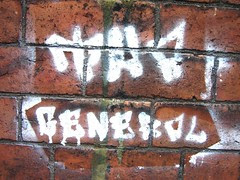 word stencil on brick
Here’s Simply Clare reflecting on some of the subtleties of social participation before taking a well-deserved break. Meanwhile Ideant gives us a lengthier exploration of social media and civic participation. The post (or is it a mini-essay?) works really well as a way of teasing out the themes in the debate and nearly manages to unmask the ideologies that underpin the more extreme positions. By that I mean the new age of total participation envisioned by cyber-evangelists and the dumbing-down culture crash views of the technophobes. The analysis helps to identify themes, but really does little more. It seems that there is some evidence of the potential for civic participation - that’s promising, but it’s as far as it goes. As for dumbing down, that’s the same old moral panic that has always haunted new media.
Posted by Guy Merchant at 1:39 PM