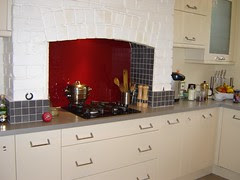 kitchen update1
Two recent media stories raise issues about unregulated media. What should we allow, what should we resist and, of course, how - are central questions. Racist behaviour is the latest of a long list of challenging issues in ‘reality’ TV. Reality has become a slippery term. This made-for-TV version of reality creates the illusion that we are looking behind the scenes at how things really are. But it’s not exactly like that (not real) but of course, there’s no denying it’s actually happening there on our TV screens (real). And then to thicken the plot in comes disrespectful behaviour (racism) which is unpleasant and all too common (real). Thousands complain, politicians get involved, but of course it’s already happened. Slightly different in some ways is the way in which supporters of Le Pen’s far right politics (real) set up an office in Second Life (differently real). Here complaint was transformed into activism, but the problem continues. Then there are rumours that UKIP (unreal) are setting up offices in Second Life. That’s just weird – a party that is obsessed with boundaries crosses the blurry boundary – at that stage I just laugh at the possibility that my virtual brother might want to have his two Lindens-worth in Second Life!
Posted by Guy Merchant at 12:13 PM