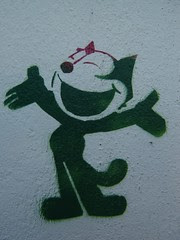 There ya go!
Weird, today I completely lost the bookshelf on the sidebar of my blog. When I checked, the code was still there, so I just re-wrote it. At the same time I took the opportunity to create a new section, so you can download my reviews of Travel Notes, New Literacies (2nd edition) and so on. After I’d done that it took a good half hour to go live even though I could see it on preview. Maybe Blogger’s playing up or something. But then the other (third) weird thing happened. I’d been working on the laptop and when I closed it down, a little voice said ‘Bye!'. It definitely did, I’m not imagining it. And it’s never done it before. The only explanation I can think of was that I’d been temporarily running some remote desktop software (Citrix) – maybe that says goodbye when you shut down. Maybe, maybe not. Still, weird stuff happens I suppose.
Posted by Guy Merchant at 1:50 PM

i love the review of newlits2, Guy. No question you've grabbed the spirit and intent of the book, and in your typically generous way. The question about blog quality is on the money. when purposes are so diverse and so personal it *is* definitely risky to plant particular criteria on a practice in general. I guess what you have put your finger on is some personal preferences showing through -- prompted by contingencies of supply and demand. If we get to revamp the beast again we'll either drop it or own it up front. meanwhile, thanks for the care taken in producing a review that is really useful for us, and most welcome.

Thanks for responding - and so publicly, too. Yes, I wondered whether I went OTT about blog quality, but on balance I stick to my point. As you know I celebrate the 'freedom to blog' and don't really like the A list or any other list. That aside, I do think your taxonomy of blogs is very useful, so keep plugging that one!!!