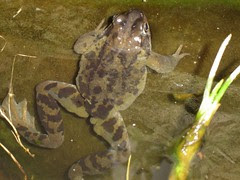 frog
Is Nada Kakabadse fanning the flames of moral panic in her investigation of the addictive effects of ICT? BBC news reports that techno addiction can be so bad: that people wake up several times a night to check their e-mails and text messages (the full report is here).Well I can go one better than that. On Thursday night I got a text message whilst I was asleep….but I knew what it said before I read it the following morning. Could this support the theory that I now receive text-messages straight to the brain, thus bypassing any technological devices? Have I gone beyond addiction and entered the realm of psychic messaging? Probably not – it’s more likely that my life is thoroughly predictable…. Anyway, the whole crackberry phenomenon already attracted some good headlines in the Daily Mail last August: it’s similar to drugs – they said (you know you can get arrested for carrying them, you get high and then it's back to normal etc etc). But Kakabadse’s tells us that we would: be surprised how many people had their PDA or Blackberry next to their bed heads. Well maybe they’re using them as alarm clocks, or pillow books....who knows? Well, let’s turn this whole thing around and ask why frogs aren’t getting addicted to technology, that's what I'd like to know?
Posted by Guy Merchant at 10:29 AM