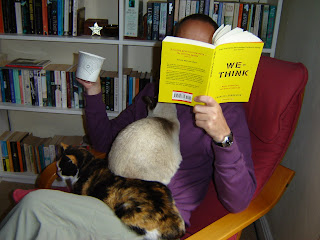 I think I’m generally optimistic about the potential of Web 2.0. The book Web 2.0 for Schools : Learning and Social Participation, written with partner in crime Dr Joolz must communicate that optimism. It’s the sort of optimism I respond to in Leadbetter’s book We Think. But then his is a romantic view of Web 2.0, a view that seems to ignore issues of power, social division, and ownership. It’s all very communitarian, which is no bad thing of course, except for the fact that it’s a naive position to adopt. Bolter and Grusin (Remediation) is a more thought-provoking piece. They argue that "many cyberenthusiasts assert that the web and computer applications are creating a digital culture that will revolutionize commerce, education, and social relationships. Thus, broadcast television is associated with the older order of hierarchical control, while interactive media move the locus of control to the individual. That digital media can reform and even save society reminds us of the promise that has been made for technologies throughout much of the twentieth century..." (2000:60) and in so doing they provide a counterpoint to Leadbetter. I’m also rather taken with their description of networks of remediation and how new media must enter into relationships of respect and rivalry with other media. It is interesting then to trace how texts cross between media. Tweeting Blip.fm DJ onthetop playing Daft Punk’s Technologic could illustrate this. The link from Twitter connects to a YouTube video, one of several recontextualisations of the orginal sound track. This sort of hypertextual recombination has the capacity to make new meanings whilst at the same time challenging the haeccity of the text.
Posted by Guy Merchant at 9:37 AM

Can't believe that you wrote 'hallenging the haeccity of the text.' ... that aside I am not sure how it challenges. I was thinking that maybe it strengthens the 'thisness' of a text... have I misunderstood the term, or am I just looking at it in a different way?

I know! Where did that come from? I just re-read it now cos I wanted to put a backlink to the tweet... but well seriously, I think it does. I mean WTF is the text? The song, the vid, the blip, the tweet, the blog? And when it's embedded/linked I think there's something that isn't captured by intertextuality or recontextualisation. It's more like decontextualisation; or anyway that was the train of my thought...