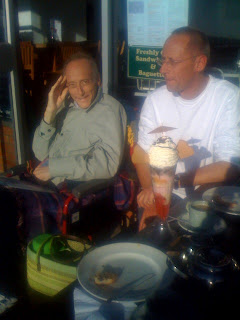 Even in the face of a family bereavement old media insists on re-cycling what they think we want to read. Obituaries of my brother have not been too kind. The literacies of power are everywhere at such times, even in the documentation which is recorded and signed, and then signed again. I remember Roy Harris in 'Rethinking Writing' claiming that your signature is the only thing you can't forge - but that's indeed what I thought I was being accused of at the Registry of Births and Deaths in Barnstaple. 'What does that say?' I was asked. 'My name.' I replied in all honesty. 'But what?' came the reply. And so I had to slowly write my name on some scrap paper to try to recall what exactly that scrawl was supposed to represent! Anyway literacy aside, the photograph shows the two of us outside the Captain's Table a week before he died.
Posted by Guy Merchant at 12:02 PM