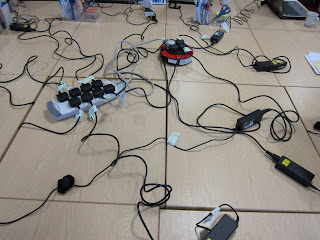 These last three posts under the title of 'Making it' are just ways of trying to figure out some connections between how stuff is produced, its history and the various roles of people and technologies. If the bookcase began with a plan, or a script, in the form of a text, it took human labour and the control of particular kinds of tools to produce. It grew out of a specific event or performance, in a particular time and now continues to perform a function. And presumably the rock band also started with plans or scripts - a number of different texts, musical, visual, gestural - and even, sartorial. Control of the musical tools is required for production as well as video tools to capture the performance. It presumably grew out of a rehearsed, a practised performance and continues to perform the function of entertainment. And so, too, the dance video, inspired by earlier texts or cultural forms, it is a performance at the practice stage. People and practices are central to all three performances, but they each involve intricate connections between texts and tools and all have there own history and temporal tragectories. The stuff we are left with seems to carry all the traces of prior activity, is conditioned by it and it turn conditions future activity.
Posted by Guy Merchant at 7:28 AM