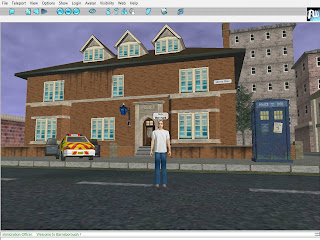 There's been a bit of technical glitch which is now fixed, and so I'm back in Barnsborough once again! And that's quite strange - the same old 'place', familiar, even the bits I'd forgotten about. So I snapped myself outside the police station as a memento. I remember what it's like inside, but I didn't return. I know the cells. So is it a place? Well, that's the experience I report. Boellstorff would say that. He would argue that it's an act of homo faber: a created world 'for human sociality' (p. 237) in other words a distinct place. But what sort of relationship does it have to the 'actual' world? Is it an extension, a parallel world, an imaginal space, a mulimodal palimpsest, and does it matter? That's the debate I'm currently exploring in the book chapter. I think it's at this point that I may need help from my co-author!
Posted by Guy Merchant at 11:32 AM