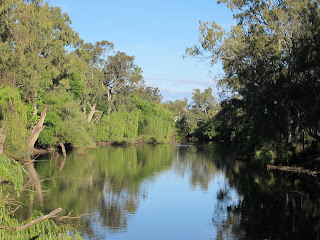 Wagga Wagga is a great little place. There's a picture of the Lagoon I took yesterday evening. I'm so fortunate to be so well looked after. Today I've been up to the university and in between meeting people I've been reflecting on Stephen Turner's ideas about emulation. They've got rather mixed up in my mind with something from Philip Roth, which I think is so neatly expressed. He's introducing the central and charismatic character, Mr Cantor. Here goes: 'His athletic, pigeon-toed trot was already being imitated by the playground kids, as was his purposeful way of lightly lifting himself as he moved on the balls of his feet, and the slight sway, when he walked, of his substantial shoulders. For some of the boys his entire bearing had become theirs both on and off the playing field.' (Nemesis:13) There goes my role model!
Posted by Guy Merchant at 11:04 PM