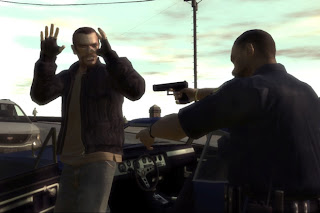 I'm currently writing a piece based around The Trashmaster. The Trashmaster is of interest from several points of view: it is an example of ‘machinima’, a movie made with videogame engine, and it is also the first of its kind to cross-over into mainstream cinema. Like anime music video (AMV), in which anime cartoons are edited and dubbed with rock music, machinima has its roots in DIY fan video production. It is is an 88 minute movie made from the popular, and in some contexts notorious, Grand Theft Auto IV videogame, and features a ‘vigilante sanitation worker’ involved in a battle against corruption and crime.
Posted by Guy Merchant at 12:19 PM