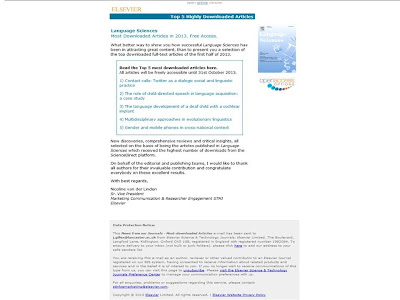 In retrospect I think Julia Gillen and I managed to capture something of the essence of microblogging in studying how Twitter was used in what you might now call 'the early days'. But it was still great to see that the paper 'Contact Calls: Twitter as dialogic social and linguistic practice' was the top downloaded article in Language Sciences, and as a special deal it's now available free till 31st October! The paper has a natural partner with one I wrote with Julia Davies on blogging. Both are insider accounts of how we as academics have taken up social media and used it for our own purposes. Trying to describe the approach we used is quite hard - insider account is probably the best, but we've also tried 'dual autoethnography' to try to capture the idea of a parallel and reflexive endeavour. Neither study really has the depth and nuance of autoethnography, but the idea of a two-handed approach in looking at adoption/ early adoption has its advantages. See what you think!
Posted by Guy Merchant at 1:11 AM