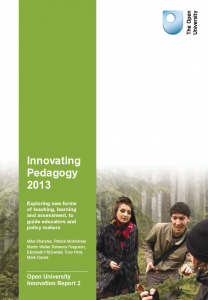 You might guess that a publication addressing the state of the art in pedagogical uses of technology would include MOOCs, learning analytics and badges - and that's exactly what you get in the OU review Innovating Pedagogy 2013. But you also get more varied material on geo-learning and 'maker culture' alongside useful critiques of familiar topics like learning from gaming and digital scholarship. I thought the idea of rating the impact and timescale for adoption was an interesting and original approach - much better than that tiresome trick of lifting a sentence from the text and putting it in a large font, as if it is more significant or somehow captures the essence of what's being said without subjecting you to the chore of reading the whole page. One of these inserts is 'technologies may change, but the innovations in  pedagogy bring lasting benefit' - it's a rather vacuous statement in my opinion. Meanwhile the idea of 'one tablet per child', recently adopted in Thailand shows the extent to which national governments are willing to invest in technology - the scheme, still in the pilot stage is apparently paying off already. It's the sort of investment that's needed before innovating pedagogy can take place.
Posted by Guy Merchant at 11:48 AM