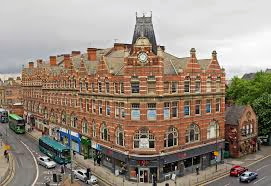 Like many cities that prospered in late Victorian times, the centre of Nottingham still has those imposing multi-storey buildings or chambers that served as the office blocks of that era. In my youth, these were the premises of solicitors, surveyors, small businesses and suppliers, and they were often half hidden behind anonymous-looking doors set in between the shops, banks and department stores of the city centre, accessed through a labyrinth of winding corridors and dim stairwells. They were, in some way at least, the private areas of that urban environment. And in my teen years, when the city seemed like a playground, my friend and I filled many an exciting afternoon exploring these spaces. Sneaking down passageways, tip-toeing up linoleum-covered stairs, opening creaking unlabelled doors, the unexpected and unannounced thrilled us in the very moment, at every turn. We would never wittingly take the same route twice.  Our exploits were halfway between playful investigation and trespass. One moment blundering into a typing pool, a reception desk, the back room of a shop, an office workers' tea station, a stationery cupboard; another stumbling into a jumble of brooms, mops, cans of cleaning fluid and tin buckets.These spaces weren't exactly private, but neither were they public. What's more we had no good reason for being there in the first place. Part of the fun lay in that. We might get caught, or challenged (and sometimes we were - and that, of course, was half the fun), but at the same time we would be rewarded by a different view of the city, some novel connection, some unexpected learning, spilling out onto a different street. But after all where were we in this city in our youth? Too young for pubs, sometimes too noisy, too raucous for the cafés and tea shops, and still unqualified and woefully ill-equipped for the world of work. Nothing bad came of it. And it gave us the taste of freedom, as we worked our way between and outside the lines of what was expected; it filled time that was otherwise unaccounted for, school having become too tedious, too regimented, altogether too much. That youthful diversion now has a name: it's called urban exploration. In fact, it was reading about urban exploration (or place hacking), in Bradley Garrett's  excellent ethnography 'Explore Everything', that brought all this back to me. In a strange sort of way it offered me an intelligent rationale for something that had seemed like a half-forgotten, and somewhat quirky adolescent pursuit. At that time, I am sure that we didn't know quite what we were doing or why we were doing it, we certainly didn't discuss it, we just did it. It was fun. Yet we were 'reclaiming the city', blissfully unaware of Debord, or the situationists, or any guiding theory or politic, for that matter. If it was covered in the underground press of the time, I certainly missed it and so did my friend. And so all this makes me think how we may often do quite reasonable, intelligent things without exactly knowing why - at least at the time. Either that or we have an astonishing capacity to make sense out of the most random of things, thereby dignifying our seemingly unending acts of human foolishness. But once something like this is given a name, explored in a thoughtful way, it seems to articulate the motive - or at least part of the motive that propelled it in the first place. That journey of reading and recalling urban exploring reminded me of how my longstanding interest in visiting and sometimes photographing ignored, dilapidated and abandoned buildings took on new meaning when I read about the ideas of 'ruin porn' and bunkerology, how my regular and random zigzag walks around Sheffield looked and felt different when they were rethought as psychogeography. Now, or so it seems, I know why it interested me in the first place. Did a name, a theory, bestow new meaning upon it? Or was the meaning there, already awaiting its later discovery - in some way immanent? Did the incoherent blind interest simply gain respectability through a post-hoc rationalisation? Or more likely, or at least more attractively to me as an academic, did the act of reflection, in a dialogic relationship with others who have done and thought about similar things, help in bringing into being new experiences, and new perspectives on old experiences? A new way of looking. And does all this - this process of re-thinking, help us in imagining possible future actions, experiences, diversions or misdemeanours? I don't know, but either way one thing is certain, I will continue to explore, in my own way, buoyed up by what I have read, what I have talked about and what I have thought. Perhaps, just perhaps, that constitutes an invitation, too. After all, those old Victorian buildings are still there somewhere, as are both our current and our remembered experiences and actions!
Posted by Guy Merchant at 10:20 AM

Very much enjoyed reading this post, inspired by a really interesting book. The human compulsion to explore out surroundings has clearly always been there, but I wonder if the relatively recent articulation of that compulsion - giving it a name, creating online forums etc - is a growing reaction to something... or whether simply arises from the ability we now have, via the internet, to connect with other people who do the same (sometimes strange) things?

Thanks for your comments, Chris. Great stuff, and I love the book. At the Dallas conference we heard about a bunch of kids doing something similar in school in the construction of digital brochures. They ended up going into unofficial spaces - out-of-bound etc. The researchers called it countermobilities - I liked that!