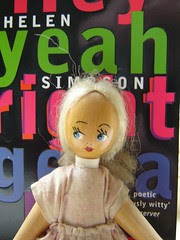 citizen doll
OK, so it’s true, the way in which you can quickly update your webspace and publish offers all sorts of new possibilities for participatory or ‘citizen’ journalism. Instances of this have been well-documented in the blogging literature. But let’s face it, most of the time it’s more likely to be about social networking, impression formation and maintaining a narrative self. We know there are journalist blogs and that’s good, but a far greater proportion operate in a niche, serve a specific affinity, network or recycle information or opinion. The big media-players do, however, seem edgy about how new developments in the digital world could de-stabilise them and mostly this is about the threat of narrowcasting and consumer power. The rush to add new media content isn’t always such a great idea. For example, The Observer’s idea of making the video evidence of the “sex-for-asylum” available doesn’t seem to add much to the story. Do they think it is more credible as a result of this, or what? Wouldn’t it be better to provide add-on information or, where appropriate alternative voices…or interaction?
Posted by Guy Merchant at 8:46 AM

very sorry to hear your pc problems . Blimen nightmare.
I found that video tape REALLY disturbing. I think it does add something for me. I scanned the text and thought 'yeah the guy's a bastard' and the system is crap. But somehow really started to feel the significance more poignantly when I heard the voices. The distinctive accents, the personal qualities in the voice .. gave it stronger impact.
But reading was quicker.
I think the script makes out the words are most imoortant; in this instance that may be so I guess.
Interesting post anyway Mr Guy. Thanks

I used to have one of those Looby Loo dolls. Their legs come off a bit too easily though.