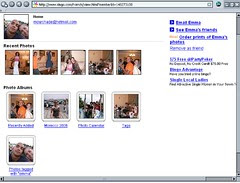 Ringo
As we’ve learnt, the take-up of social networking technology seems to be locally differentiated. Use of txting on mobile phones is a well-documented example. It’s interesting how different countries/societies take on social software, and how this plays out against the world of business interest that lurks behind the scenes. Despite a slow start, Myspace users seem to be growing rapidly in the UK….but now Bebo, seems to be overtaking Myspace …Ringo’s ‘sympathetic’ policy seems to be working too. Just from what I see, young people using Myspace are very likely to use Ringo for their images. But put Ringo alongside Flickr and it looks to me like a cheap imitation. I wonder whether it’s just that Flickr is tailored to the sort of niche I occupy? Anyway, here’s some stuff on comparing photosharing sites.
Posted by Guy Merchant at 9:47 AM

Hi, this is cheating, a bit, but as there is a limit to the amount you can upload on FLK (without paying) I have experimented by putting photos onto the Truprint site. After 15months they havn't deleted anything,and it was handy at the time (but long term????)

Cheapskate!! I know, I've done the same, but now I'm a Flickr-pro I don't find I need anything else...although of course I joined Ringo just to look at other people's stuff!!

Great post just tailor made for me!! Great links thanks Guy!!

Glad to be of assistance!