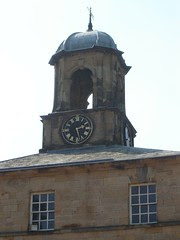 It is time
Is there such a term as hypermodification? If not then linguists should coin it, because I reckon I've noted a trend in the use of additional modifying prefixes. I first spotted it on a news bulletin in which one politician was accusing another of over-hyping a new initiative. Now I thought hyping already suggested a sort of inflation of claims, an exageration, so where does that leave hyping? As a normal state? Anyway here I found that it is defined as: To promote or publicize to excess. So the second example is from Hannah who pre-warned me about the heat in London. I loved this idea of being pre-warned, implying, as it does, that you've been given notice that you will be warned. However, on checking, this has more of a provenance - to warn beforehand faetures in Webster's 1913 dictionary. You could say that pre-warn is alternative to forewarn. Pre-warn reminded me of pre-hear which is becoming quite popular too. Logic is always a difficult thing to apply to language, but my initial thought was that pre-hear made no sense at all - you either heard something or you didn't. You couldn't hear it before you've heard it. But then I've recently seen it compared to previewing, in other words it's about listening to a something (eg music) before it's actually released. That makes sense. OK, well if there are other examples of hypermodification, let's hear them.
Posted by Guy Merchant at 8:05 AM