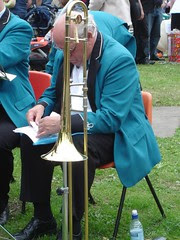 I am in Liverpool now at the UKLA international conference which has its characteristic conviviality and rich exchange of ideas. The highlight so far has been Kathy Hall's opening keynote. I found myself in harmony with nearly all her ideas about culture and identity and the role of literacy in making and re-making cultural meanings. It was important to restate the sociocultural turn in literacy research, to define culture as dynamic, complex and not necessarily benign. The emphasis on learning through participation flagged up some key themes which we followed up later. Issues around identity were a little more contentious. I'm not so sure about the agency implied in opting for identities or positions and even less sure about the idea of fashioning a coherent identity. The Seneca quote is focal here: it is a major achievement to act as one person. ...I'm coming to believe that this notion of self-narrative, and the idea of a coherent identity is in itself a cultural construction which may get in the way of a deeper analysis of mind, culture, and learning. But that's just me giving a counterpoint to Kathy's ideas and working through some half-formed ideas partly influenced by my recent re-reading of Judith Butler.