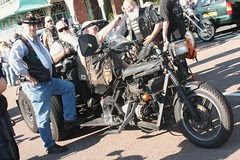 The DJ metaphor, and its associated ideas of sampling and remix have now been adopted in a number of contexts to explain how new cultural material is generated: in young children’s writing (Dyson, 2003); in the production of AMV (Ito, 2006); and in the writing of fanfiction (Jenkins, 2006). At root the basic idea is nothing new. Mahler’s use of Frère Jaques in his 1st Symphony, Luis Buñuel’s Last Supper sequence in Viridiana and the work of the brothers Grimm all suggest themselves as examples of the same phenomenon. How do we create something new? Use the materials to hand.
Posted by Guy Merchant at 2:58 PM