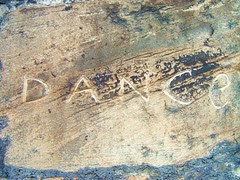 In stone on Howard Road

I probably made few friends today by going off on one about the perils of thinking of software apps as tools for learning. The trouble is I have started to become suspicious of our rather glib use of the tool metaphor in education. To be sure the idea of tool-mediated learning has an impeccable pedigree in the work of Vygotsky, those who influenced him, worked with him and those who followed him. But if we shift the ground to think of learning as participation through the endeavour of shared communication, I think interactive apps are then better conceived of as spaces for learning. In an everyday sense, a tool is usually thought of as an instrument - an instrument with a mechanical function by which a human agent moves, shapes or marks parts of the physical environment. So perhaps the idea of the tool is entirely appropriate to a theory of learning as construction, and also, incidentally, in an educational discourse in which success is thought to be measured by impact. But learning through participation and interaction moves the focus to the inter-relationship between individuals, the spaces in which this occurs, and the texts through which they negotiate meanings.
Posted by Guy Merchant at 12:18 PM