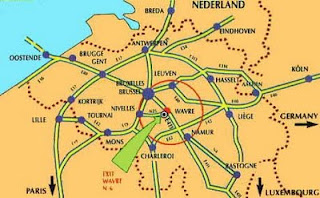 I'm in Belgium at the moment, but I'm reading Robert MacFarlane's evocative and excellently written book 'The Wild Places' which is a first-rate exploration of wild-ness and one which is tied to the British landscape. In a section on mapping, he tells us that over a million road atlases are sold in England and Ireland each year and that there are thought to be about 20 million in circulation at any one time. That's a lot of geographical literacy that's going on - and that's before you start thinking about AA maps, Google maps and various sat nav systems. Wow! But, as he observes, "The fells, the caves, the tors, the woods, the moors, the river valleys and the marshes have all but disappeared. If they are shown at all, it is as background shading or generic symbols. More usually, they have faded out altogether like old ink, become the suppressed memories of a more ancient archipelago....The priorities of the modern road atlas are clear. Drawn by computers from satellite photos, it is a map that speaks of transit and displacement. It encourages us to imagine the land itself as a context for motorised travel." In other words (my words) maps help to produce a kind of social identity - a mobile identity - in which we are constantly on the move between urban spaces, and the rest is something that is blank or something we go through.
Posted by Guy Merchant at 7:10 AM