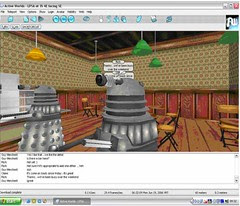 PictureA
This is a screenshot of the 3D virtual world we’re developing in Barnsley. Today the planning group met as dalek avatars and we explored the grids of the city streets with Rich from Virtually Learning as our guide. The idea is to pilot in the autumn and roll out to 10 schools in the coming year. We’ll be starting with 9 year olds who’ll navigate their way around a 3D world like Active Worlds (and here), creating narratives around the clues left in the world. But perhaps more exciting is the realtime synchronous chat interwoven with one-to-one telegrams which will make it highly interactive and collaborative across sites. At the moment we’re thinking that they’ll explore this abandoned city whose inhabitants have mysteriously disappeared – evacuated, abducted or escaped from an invasion, a biohazard or such like. An ongoing debate amongst planners is the general state of the VL – is it golden age rural England, the mean streets, or a safe modern environment? Will there be grafitti like this? Will there be danger? Maybe. Will there be bodies? No. Monsters….ghosts? We’ll have to wait and see. Then there’s the down to earth reality. How will teachers build this into classroom life? Maybe even that’s the wrong question - perhaps we should asking, how will this change classroom life? I’ll be posting on this as we approach launch time, but unfortunately folks, it has to be a closed world. Expect regular updates through your roving reporter, as usual.
Posted by Guy Merchant at 12:20 PM

This is so exciting!
Can I join?
I am after all,
virtually Barnsely too!

Perhaps we could think of ways of getting you to join in when we get to the pilot stage in September...

"At the moment we’re thinking that they’ll explore this abandoned city whose inhabitants have mysteriously disappeared" now there's a novel concept! not one to be MYST!!!

OK, so it's unoriginal...but it's fabulous. So much more interesting than most eduactional apps.