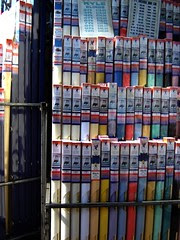 There’s been a whole week of blog-bashing in the media. Bouncing off the ‘code of conduct’ story, journalists have been quick to suggest that blogs have had it – the newsmakers are telling us that blogging is old news! Blogs we’re told, are pointless, the territory of bores and backbiters with nothing important to say. No content only contact. Statistics apparently show that the rate of growth is slowing up and the average shelf-life of a blog is getting shorter. But, I’ll be keeping on, because I believe in circulating ides, keeping a record for myself and whoever else is interested - and I’m interested in having a voice. On Friday, the Rachael Bell story about a teenage party advertised on MySpace which ended in mayhem was the latest internet scare story (there’s an intelligent comment on the issue, here)…and today Death in Cyberburbia uses the depressing story of an online suicide to launch a strong attack on the dangers of spending ‘too much time’ in the unreal world of new media. Today I was looking at some of the exciting work that teachers are doing with blogs and wikis – and that made me think how easy it is to criticize the channel of communication rather than the content. Isn’t it a bit like blaming the development of speech for offensive language, or the invention of writing for fascist literature, isn’t it?