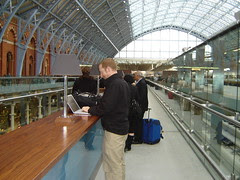 St Pancras
I’ve been reading about social objects – which is geek-speak for the kinds of sharing devices which act as nodes for social networks. So Flickr uses the photograph as a social object; YouTube the video clip and so on. This reminded me of the emphasis placed on the role of cultural artefacts in identity work by Holland and her colleagues (here). In Holland’s work the artefact is used to modulate behaviour, cognition and emotion so conferring a degree of agency. The idea of a social object seems rather one-dimensional in comparison and is being used to understand what works and why in the world of social software. But then social objects are cultural artefacts and maybe this is important to the study of emerging identities and Web 2.0.
Posted by Guy Merchant at 12:27 PM