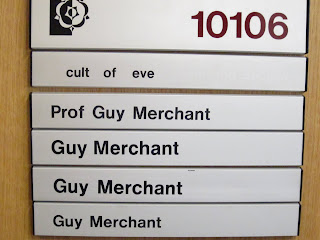 Well I finally got recognition of some of my multiple identities. How postmodern is that! So the doorplate saga rolls on, but it brought to mind all that stuff about anchored and transient identities which seemed to go down quite well. I want to revisit the ideas, particularly with respect to the data I have on teens’ online social networking. The original idea was really motivated by a need to underline the fact that whilst many were arguing for the levelling effect of the internet and suggesting that you could be who you wanted to be in an online community, the weight of one’s historical and social past is actually still present, and that performances of gender, class, and so on are still very much in evidence. Of course I was not arguing for an essentialist self, but merely suggesting that strong, structuring forces continue to exert an influence. These could be seen as discourses to which we are strongly anchored. On the other hand the kaleidoscopic identifications (often media-related) and more temporary I saw as transient identities, easier to remake and by definition easier to discard. Perhaps the division was too strongly made, because it has since become clear to me that the sort of things I referred to as transient could actually be closely related to or even expressions of anchored identities, the TV shows we like, the toys children choose, the sport we feel passionate about and so on. So I’ve shifted my ground in the direction of a particular kind of relational performativity. I particularly like Butler’s idea of interpellation but I am also still working with what the ideas of transience and anchorage might add. In the interim I’ll just mess around with doorplates.
Posted by Guy Merchant at 8:51 AM