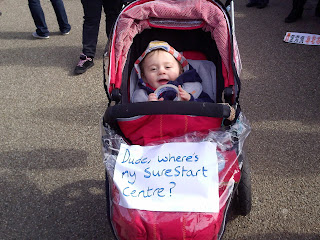 Young children lit up yesterday's dissemination conference of the 'Children's playground games and songs in the new media age' project at the British Library. The documentary film Ip-dipi-dation: My Generation was a triumph. I hope it gets a more public airing or at least gets posted somewhere where more people can get access to it and talk about it. Adult intervention has been minimised, the kids just talk and show what they do, and that's what makes it so powerful. Having said that it is, of course an adult view, with the images carefully framed, edited, and sequenced. We hardly notice the meta-text which is about adults talking to adults about children. And I was left with that overall feeling about this area which is such a tricky one to study. The project team have been meticulous in avoiding over-interpretation and unnecessary theorising, but as adults we certainly have a thirst for that. The British Library now have an impressive digitised archive which you can see here and the researchers have plenty to write and talk about. Part of that, I suspect, will be about the methodological problem of making sense of children's worlds in the first place. I was struck by how much we want to make some of this ephemeral stuff meaningful. For the children themselves, particularly the younger ones, I suspect that meaning is always in process. They do it because they do it, without being clear about why, and so the meanings are both opaque and fluid, and always multiple.
Posted by Guy Merchant at 3:43 AM

Great blog! Do you have any helpful hints for aspiring writers?

I'm planning to start my own site soon but I'm a little lost on everything.
Would you advise starting with a free platform like Wordpress or go
for a paid option? There are so many choices out there that I'm totally confused .. Any recommendations? Cheers!