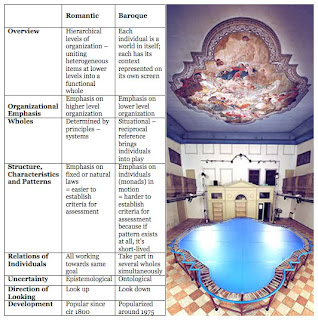 I'm still on the romantic/baroque theme today and savouring Chunglin Kwa who makes the case for the baroque so eloquently: 'It may seem unnecessary to use an overloaded word like baroque, especially because it is not immediately apparent that there is a historical continuity with the grand style of the seventeenth century. In the case of romanticism it is much easier to argue for an uninterrupted lineage. Yet several important characteristics of the historical baroque make the term baroque attractive to use for later periods, including the present. First the historic baroque insists on a strong phenomenological realness, a 'sensuous materiality'. Second, this materiality is not confined to, or locked within a simple individual but flows out in many directions, blurring the distinction between individual and environment. And third, there is also the baroque inventiveness, the ability to produce lots of novel combinations out of a rather limited set of elements, for instance as in baroque music. Similarly, action in early baroque theater is not based on the logical development of a plot but rather on a sequence of monologues, debates, and allegories.' (Chunglin Kwa, 2002:26). And it satisfies the inner-geek to copy this out of my Evernote notebook entitled 'Folds'!
Posted by Guy Merchant at 10:06 AM