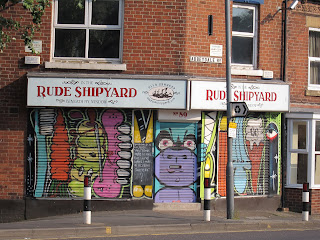 The shops used to be closed a lot. Sundays completely, often Saturday after lunch, and mid-week. I think Thursday was 'early closing day' when I was young. So if you were incarcerated in an educational establishment (and most of the time I was), looking at what you could buy was time-limited. From quite an early age I compensated for this by window-shopping, pressing my nose up against the fronts of closed shops, peering in against the glare to see what you could get. I started with children's toys, but as my ambitions grew I began to focus on musical instruments and LP covers (big boys' toys), spanners and wrenches (serious boys' toys) and eventually clothes and electrical goods. I carried that on well into adult life and as a matter of fact I still enjoying looking at things I could buy, might buy, or might one day buy. It's everyday life in the consumer market-place. Sometime in the 1980s shop-owners - particularly those in urban areas - began to worry about civil disturbance, disturbed, no doubt, by images of rioters putting bricks through shop-windows and helping themselves to stuff they ought to pay for. They began to install shutters to protect their interest and city streets, at least on Sundays, became greyer places. When I first got into Flickr, partly as a homage to my days as a window-shopper, I started photographing shutters, putting them in a set. I was interested in the way that shutters were becoming a surface for art-work and graffiti. The security barrier of the shutter effectively kept most people out, but while the goods were protected another form of expression was errupting. Now many shops commission artists to decorate their shutters. So you'll see The Rude Shipyard, itself a wonderful boho artsy venue has followed the trend. Must upload to Flickr!
Posted by Guy Merchant at 3:54 AM