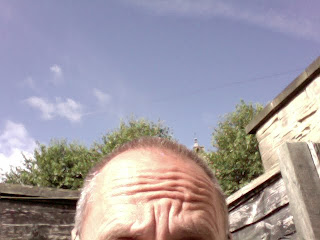 Way back when I was doing my Masters, Bill Harpin upbraided me for taking the scenic route in my studies. He wanted me to read his book on writing; I was reading Derrida. I'm not sure it made any difference, but old habits die hard. Now somehow, a week or so ago, I ended up getting Brian Massumi's 'Parables for the Virtual'. Maybe I liked the title, or perhaps it was the cover. Anyway I got 2 copies. I thoroughly enjoyed the first copy and read it cover to cover. Just as this reading was coming to an end I realised that I'd hardly understood a word of it, and so I decided to go to the second copy and it is, indeed, exactly the same. Word for word, the same. But I'm going to it as a second reader, to try to find the point at which I got lost, and maybe to watch myself getting lost all over again. This much because I like Massumi's starting point. It goes a bit like this. He critiques cultural/social theory for its inadequate account of the 'body in movement'. He says: 'Earlier phenomenological investigations into the sensing body were largely left behind because they were difficult to reconcile with the new understandings of the structuring capacities of culture and their inseparability both from the exercise of power and the glimmers of counterpower incumbent in mediate living. It was all about the subject without subjectivisim: a subject "constructed" by external mechanisms. "The Subject".' (2) That creates a sort of stalemate because for example: 'Aren't the possibilities for the entire gamut of cultural emplacements, including the subversive ones, precoded into the ideological master structure?' (3). Instead Massumi focuses on the sensing body, seeing structuration as a back-formation - 'positionality is an emergent quality of movement' (8). As you can see, I'm doing OK so far, but that's just the introduction. When will I see myself getting lost? That's the mystery. No. The real mystery though is why Amazon sent me two copies. Maybe they knew I'd struggle with the first reading, who knows. They made me read it twice.
Posted by Guy Merchant at 2:04 AM