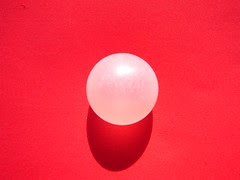 OMG! - I sounded such a pseud when I wrote that photo-sharing was about “dignifying the quotidian” the other day. But hey, it’s so true! Take today’s photo – it’s a real corker; but what is it? “In its details, however, and caught by surprise, the world has a stunning clarity." (Baudrillard, 1993:155). OK, so I wasn’t totally original about dignifying the quotidian…. it’s that rolling ball cut out from a deodorant bottle! But alongside, and as if in counterpoint to the new photo-sharing reality, we have the pixel-sharp spectacle of BBC’s Planet Earth series – possibly the last gasp of broadcasting as we know it. Watching a segment I was intrigued by the way it keeps fast-forwarding so you don’t get bored - bored with apes hanging about; clouds building up over the Himalaya and sunrise on the Rockies. You get more detail and more time on predators chasing their prey - but of course less on slow death, blood and guts. And also, don’t forget, you get David Attenborough - but then again you can always put it on mute and listen to some music instead. Then finally there’s the diary bit where they tell you how tedious, time-consuming and technical it all is (conveniently missing out how much it cost and what proportion of that was our license fee).