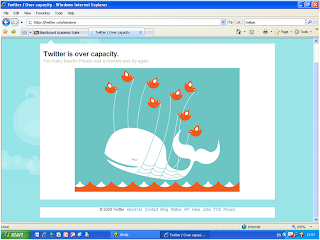 For some unknown reason I was quite excited to find Twitter over capacity this morning. It was almost as if my small tweet was the straw that broke the camel’s back. Probably not true at all. And then this afternoon I came across this story of someone tweeting a burglary! It could be the start of a media avalanche, as new moral panics break out: obese tweeters, criminal rings on Twitter, sex tweets, Twitter predators and suicide tweets. I hope not. But as groups of us experiment in using this service for our own purposes (narrow concerns?) the idea of inline tagging, the so-called hashtags, becomes an increasingly attractive option for filtering out and filtering in to your timeline. I’ve already removed one or two people, just because their tweets don’t interest me, and I’m open to finding new people whose tweets might be music to my ears.
Posted by Guy Merchant at 12:52 PM