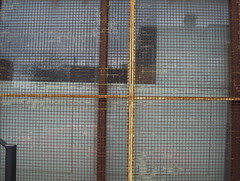 Shutter up (London Road)
The shutter thing has been a bit of a think-piece about boundaries. Boundaries between the inside and the outside - what is public and what is private. Often we create a binary here, but in actual fact we have permeable/ fuzzy boundaries. I think blogging helps us to see how this works, as aspects of our private worlds leak into the public domain.

Franzen in his essay ‘Imperial Bedroom’ clearly thinks in terms of strong boundaries between public and private when he says: “If privacy depends upon an expectation of invisibility, the expectation of visibility is what defines a public space. My ‘sense of privacy’ functions to keep the public out of the private and to keep the private out of the public.” And later: “A general public place is a place where every citizen is welcome to be present and where the purely private is excluded or restricted.” Thought-provoking, but I think he over-simplifies. What, for example, is this space?

It is a place to say that stuff…but also to note (or point to) other stuff. Like the appearance of the Motorola Rocker mobile phone with built-in itunes. Good! Technology converges, and it’s better than having two sets of earphones and tangled cables (MP3 and hands-free). And like the guy who’s selling pixels here (and here’s his blog). And like this try-out - Catch Bob a new platform for mobile gaming. I get that public information into my private space…no, no, it’s not as simple as that.

This whole series on shutters has been interesting to follow thanks Guy .. . and as you know I have an interest in that public/private tension of Internet space. (And have found Foucault's heterotopias helpful in this respect.) But another area that is curious is how some readers have told me that they feel they are intruding on my private space when they have read my blog.

OMG! I forgot you said that: 'they feel they are intruding on my private space when they have read my blog.' And other people say how they feel a bit funny when they pull their blog-history into (public) meatspace. Voyeurism and flashing come to mind, metaphorically speaking of course. And let's hear it for heterotopias; let's get liminal!