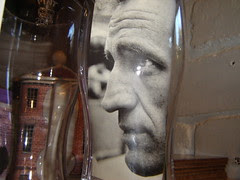 Neal3
In a magazine article in 1967, Jack Kerouac set out what he thought writing might be:

"...spontaneous or ad lib artistic writing imitates as best it can the flow of the mind as it moves in its space-time continuum, in this sense it may really be called Space Age Prose someday because when astronauts are flowing through space and time they too have no chance to stop and reconsider and go back. It maybe that they won’t be reading anything else but spontaneous writing when they do get out there, the science of the language to fit the science of movement"

Not only does this seem to capture the vitality of Beat writing, it also seems prophetic when we think of how new forms of writing take on the functions of speech and attempt to achieve a closer mapping of the contours of talk (txt; msn etc).

Being of a certain age, I felt it my duty to watch Scorsese’s portrait of Dylan last night (simultaneously broadcast on BBC2 and PBS: are we supposed to be impressed?). Basically I mistrust all acts of revision, the myth of history, particularly when someone seems to be reworking popular culture icons of another era. But that aside, the most memorable images are those of the young Dylan churning out words on a portable typewriter. Not just the technology (quaint though it now seems) but the rapid outpouring of Space Age Prose – very modern and peculiarly old-fashioned at the same time.

So there he is, taking on the mantle of the Beats, doing this rapid (ephemeral?) writing on the move...portable. On the road. Writing with no direction home.

[…and themed in here, my photo re-mix of Neal Cassady ‘Watching for the cops’ inside a beer glass.]