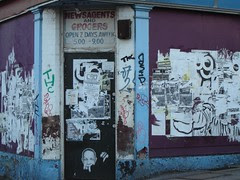 This is the second posting of a boarded-up shopfront with flypost graffiti – seems like it’s becoming a theme. Basically, the shopfront is covered in adverts for events that have already happened. Abandoned print. It’s like the abandoned shopping lists that are collected and displayed on redhotscott, who says: This site has been inspired by the kind people who abandon their shopping list at the end of a trip to the supermarket. I collect their shopping lists …Each shopping list I find is added to my collection along with comments about each list. He (? why did I choose that pronoun?) has scanned and annotated 201 shopping lists so far.


I was struck by how this activity of finding and annotating everyday materials has become so popular. In common with the Harsmedia Soundblog, redhotscott is working with found objects. The only difference is that Harsmedia transform their found sounds into art. Similarly, Mark Dion, in his River Thames project worked with found objects - beer bottle tops, rusty keys, discarded combs, animal teeth, shells and plastic lighters - rescued from the banks of the Thames, and painstakingly reclassified in display cases and drawers awaiting inspection in Tate Modern. Collecting, classifying, tagging…. and some people do trainspotting for fun.