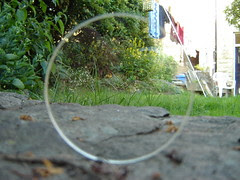 magic realism 2
Students can now do blogs and wikis in our VLE, which is cool, but somehow they seem like a shadow of the real thing. It feels as if social software has been colonized by the education system. So, to resurrect a debate initiated by Colin and Michele, have they therefore become inauthentic practices? We, in education, always seem to be two steps behind, but part of me thinks that some change – gradual though it might be – is better than none at all. The same thing goes for the Barnsley virtual worlds project. It’s tame compared to Active Worlds itself, but then again it’s like a quantum leap for the schools involved. I suppose I’m just going to patiently watch how it fits into the classroom context.
Posted by Guy Merchant at 12:01 PM

dunno if it means it is no longr authentic. Can anything in schools be authentic?
I suspect not as it has to be controlled filtered and channelled for all kinds of easns - assessment, accountability, ethics, 'delivery' of specific things....

Also I think that all web stuff feels contrived once everyone jumps on. Somehow there is aloss of newness of originality which changes it into something tried, tested and ritualistic.

True, I agree, and maybe part of this is inevitable, but I suppose it's how we always manage to restrict the affordances. It seems to get leeched of all colour (did I mean bleached?)....metaphorically BUT literally too. It all becomes GREY.